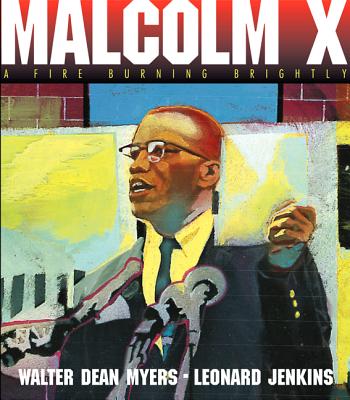 Award-winning author Walter Dean Myers, together with illustrator Leonard Jenkins, delivers a compelling portrayal of one of America's most influential Civil Rights figures.

Malcolm X lived by the idea that Black people should demand equality by taking their lives and futures into their own hands. With guidance from the religious leader Elijah Muhammad, Malcolm became one of the most powerful leaders of the Civil Rights movement during the 1950s and 1960s, and his beliefs live on today.

This nonfiction picture book is a strong choice to share in the classroom or home, and for book reports and research by young readers.

Walter Dean Myers was the New York Times bestselling author of Monster, the winner of the first Michael L. Printz Award; a former National Ambassador for Young People's Literature; and an inaugural NYC Literary Honoree. Myers received every single major award in the field of children's literature. He was the author of two Newbery Honor Books and six Coretta Scott King Awardees. He was the recipient of the Margaret A. Edwards Award for lifetime achievement in writing for young adults, a three-time National Book Award Finalist, as well as the first-ever recipient of the Coretta Scott King-Virginia Hamilton Award for Lifetime Achievement.

Leonard Jenkins received his B.F.A. from the American Academy of Art in Chicago. He is the illustrator of Sunflower Island by Carol Greene, which received a starred review in Publishers Weekly. Mr. Jenkins lives in New York City.

"The pictures express the intense inner conflict and changes in the boy and man On almost every page, there's a quote in bold black type from Malcolm X's speeches or writings. They make us hear his voice." — Booklist