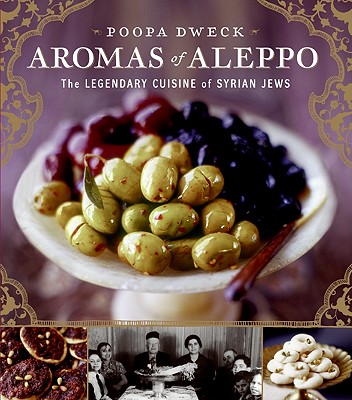 When the Aleppian Jewish community migrated from the ancient city of Aleppo in historic Syria and settled in New York and Latin American cities in the early 20th century, it brought its rich cuisine and vibrant culture. Most Syrian recipes, however, were not written down and existed only in the mind of older cooks. Poopa Dweck, a first generation Syrian-Jewish American, has devoted much of her life to preserving and celebrating her community’s centuries-old legacy.

Dweck places the Aleppian Jewish cuisine in historical and cultural context, offers 150 exciting ethnic recipes with tantalizing photos, and describes the unique customs that the Aleppian Jewish community observes during holidays and lifecycle events. Among the irresistible recipes are:

Like mainstream Middle Eastern cuisines, Aleppian Jewish dishes are alive with flavor and healthful ingredients—featuring whole grains, vegetables, legumes, and olive oil—but with their own distinct cultural influences. In Aromas of Aleppo, cooks will discover the best of Poopa Dweck’s recipes, which gracefully combine Mediterranean and Levantine influences, and range from small delights (or maza) to daily meals and regal holiday feasts—such as the twelve-course Passover seder. Aromas of Aleppo offers a rich ethnic feast for the palate, the eyes, and the soul.

Poopa Dweck is an expert on Aleppian Jewish cookery and the creator of Deal Delights cookbooks. A highly active community leader, she frequently lectures and performs cooking demonstrations. She is also the founder of the Jesse Dweck City Learning Center and Daughters of Sarah and the cofounder of the Sephardic Women’s Organization. Dweck lives in Deal, New Jersey, with her husband, and has five children.

“The intriguing recipes inspired me to head for my kitchen, but the story kept me in my chair, riveted.”
— New York Times

“Poopa Dweck has put together such a wonderful collection of delicious recipes.”
— Claudia Roden, author of The New Book of Middle Eastern Food and The Book of Jewish Food

“Aromas of Aleppo is as enticing to read through as to cook from.”
— San Francisco Chronicle

“[Poopa Dweck] has made it her task to preserve their venerable cuisine in its fullness.”
— Los Angeles Times

“The large-format book could be relegated to the coffee table but won’t be.”
— Chicago Tribune

“Tinged with the bittersweet memories of a community that lovingly upholds table traditions of the city that evicted all its members.”
— New York Sun