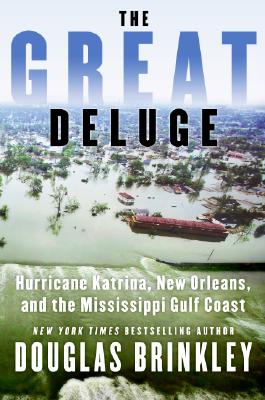 By Douglas Brinkley
$29.95
Email or call for price

In the span of five violent hours on August 29, 2005, Hurricane Katrina destroyed major Gulf Coast cities and flattened 150 miles of coastline. Yet those wind-torn hours represented only the first stage of the relentless triple tragedy that Katrina brought to the entire Gulf Coast, from Louisiana to Mississippi to Alabama.

First came the hurricane, one of the three strongest ever to make landfall in the United States -- 150-mile-per-hour winds, with gusts measuring more than 180 miles per hour ripping buildings to pieces.

Second, the storm-surge flooding, which submerged a half million homes, creating the largest domestic refugee crisis since the Civil War. Eighty percent of New Orleans was under water, as debris and sewage coursed through the streets, and whole towns in south-eastern Louisiana ceased to exist.

And third, the human tragedy of government mis-management, which proved as cruel as the natural disaster itself. Ray Nagin, the mayor of New Orleans, implemented an evacuation plan that favored the rich and healthy. Kathleen Blanco, governor of Louisiana, dithered in the most important aspect of her job: providing leadership in a time of fear and confusion. Michael C. Brown, the FEMA director, seemed more concerned with his sartorial splendor than the specter of death and horror that was taking New Orleans into its grip.

In The Great Deluge, bestselling author Douglas Brinkley, a New Orleans resident and professor of history at Tulane University, rips the story of Katrina apart and relates what the Category 3 hurricane was like from every point of view. The book finds the true heroes -- such as Coast Guard officer Jimmy Duckworth and hurricane jock Tony Zumbado.

Throughout the book, Brinkley lets the Katrina survivors tell their own stories, masterly allowing them to record the nightmare that was Katrina. The Great Deluge investigates the failure of government at every level and breaks important new stories. Packed with interviews and original research, it traces the character flaws, inexperience, and ulterior motives that allowed the Katrina disaster to devastate the Gulf Coast.

Douglas Brinkley is the Katherine Tsanoff Brown Chair in Humanities and Professor of History at Rice University, a CNN Presidential Historian, and a contributing editor at Vanity Fair.  In the world of public history, he serves on boards, at museums, at colleges, and for historical societies. The Chicago Tribune dubbed him “America’s New Past Master.” The New-York Historical Society has chosen Brinkley as its official U.S. Presidential Historian. His recent book Cronkite won the Sperber Prize, while The Great Deluge: Hurricane Katrina, New Orleans, and the Mississippi Gulf Coast received the Robert F. Kennedy Book Award. He was awarded a Grammy for Presidential Suite and is the recipient of seven honorary doctorates in American studies. His two-volume, annotated Nixon Tapes recently won the Arthur S. Link–Warren F. Kuehl Prize. He is a member of the Century Association, the Council on Foreign Relations, and the James Madison Council of the Library of Congress. He lives in Austin, Texas, with his wife and three children.

“‘The Great Deluge,’ captures the human toll of Katrina as graphically as the most vivid newspaper and television accounts”
— New York Times Book Review

“The first historical book that has researched the available record on Katrina and is the closest to actual fact.”
— Gov. Kathleen Blanco

“More dispassionate and analytical books will be written about Katrina, few will capture the human drama as well as Brinkley’s.”
— Financial Times

“An important, poignant and often-infuriating look at the tragedy.”
— Denver Post

“Written with verve and energy, this is Brinkley’s best book to date.”
— Times Picayune

“…likely to be the [account] against which other treatments of the subject will be judged.”
— Washington Times

“An impassioned argument for sustained national interest in the aftermath of a catastrophe.”
— The Advocate

“…likely to be the [account] against which other treatments of the subject will be judged.”
— Daily Advertiser

“You can call “The Great Deluge” history, or you can call it journalism. But it’s good stuff”
— St. Louis Post-Dispatch

“If you’ve grown numb to the horror of Katrina, this will wake you up. It’s a stirring and important book.”
— The Arizona Republic