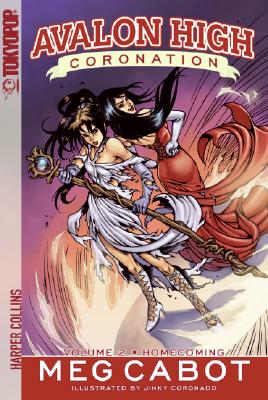 This is book number 2 in the Avalon High Coronation series.

Will's dangerous brother, Marco, has been released from the mental hospital, and it seems as if he's turned over a new leaf. But Ellie isn't sure she trusts him yet, especially when she keeps having creepy nightmares about him every night.

Meanwhile, Mr. Morton is still convinced that Ellie's boyfriend, Will, is the reincarnation of King Arthur and that if Ellie doesn't help Will believe this, too, the world is going to end—this Friday. But all this won't stop Ellie from trying to pull off the big dinner party she's arranged to reunite Will with his parents . . . even though it might be a total disaster.

When you and your friends are reliving Arthurian legend, you can never catch a break!

Meg Cabot’s many books for both adults and tweens/teens have included multiple global and #1 New York Times bestsellers, selling over twenty-five million copies worldwide. Her Princess Diaries series has been published in more than 38 countries and was made into several hit films by Disney. Meg is still waiting for her real parents, the king and queen, to restore her to her rightful throne. She currently lives in Key West, FL, with her husband and various cats.