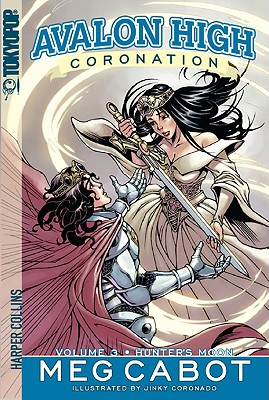 This is book number 3 in the Avalon High Coronation series.

Ellie has only one day left to get her boyfriend Will to truly believe he's the reincarnation of King Arthur, or the world will plunge into eternal darkness. But Will refuses to believe her! Meanwhile, the upcoming Homecoming game and dance have everyone distracted, especially Ellie. Some people aren't too happy about her Homecoming Queen nomination and are determined to cause trouble. Ellie's got to save her reputation and the world before the new moon on the night of Homecoming brings them all to a dangerous crossroad. If Ellie can't convince Will of his destiny, the world may never recover. . . .

This manga series of Arthurian legend and high school romance comes to a thrilling climax in this final volume. And just remember—anything can happen if you believe!

Meg Cabot’s many books for both adults and tweens/teens have included multiple global and #1 New York Times bestsellers, selling over twenty-five million copies worldwide. Her Princess Diaries series has been published in more than 38 countries and was made into several hit films by Disney. Meg is still waiting for her real parents, the king and queen, to restore her to her rightful throne. She currently lives in Key West, FL, with her husband and various cats.