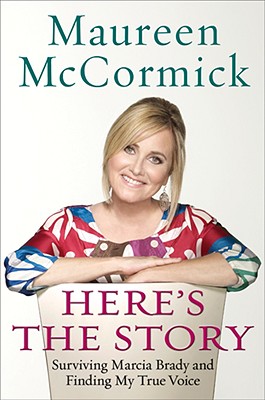 By Maureen McCormick
$25.95
Email or call for price

The New York Times bestseller Here’s the Story is the poignant memoir of Maureen McCormick, who starred as the beloved Marcia Brady on the hit series The Brady Bunch. Maureen tells her shocking and inspirational true story, taking readers behind the scenes of one of America’s favorite television families, and to the dark side, where she was caught up in a fast-paced, drug-fueled, star-studded Hollywood existence that ultimately led to the biggest battle of her life.

Born in 1956, Maureen McCormick began her career at the age of six after winning the Baby Miss San Fernando Valley beauty pageant. She appeared in numerous commercials for brands such as Mattel and Kool-Aid, and performed in early episodes of Bewitched and My Three Sons before landing the starring role as Marcia Brady in the groundbreaking sitcom The Brady Bunch, which aired in prime time from 1969 to 1974. McCormick is also a singer and voice-over actor who has made a number of appearances in television and movie roles during her long career. She recently returned to television as a cast member of VH1's Celebrity Fit Club and won! She lives in Southern California with her husband and daughter.