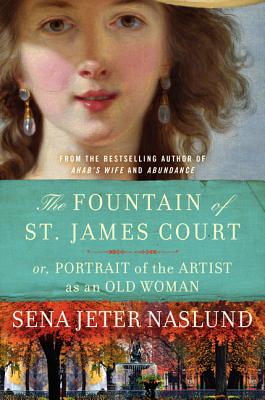 “This is a fascinating tale of two women artists -- writer Kathryn Callaghan in this century and painter Elizabeth Vigee-Le Brun who lived during the French Revolution. Vigee-Le Brun was a real-life portraitist who included Marie Antoinette among her subjects. Callaghan is 70 and brings the wisdom of her age to the story. Naslund offers a very perceptive look at two women as they progress through their art and their lives. A great read!”
— Stephanie Crowe, Page & Palette, Fairhope, AL

New York Times bestselling author Sena Jeter Naslund explores the artistic processes and lives of creative women in her groundbreaking literary opus The Fountain of St. James Court; or Portrait of the Artist as an Old Woman.

Sena Jeter Naslund's inspiring novel-within-a-novel depicts the lives of both a fictional contemporary writer and a historic painter whose works now hang in the great museums of Europe and America.

The story opens at midnight beside a beautifully illumined fountain of Venus Rising from the Sea. Kathryn Callaghan has just finished her novel about painter Elisabeth Vigee-LeBrun, a survivor of the French Revolution hated for her sympathetic portraits of Marie Antoinette. Though still haunted by the story she has written, Kathryn must leave the eighteenth-century European world she has researched and made vivid in order to return to her own life as an American in 2012.

Naslund's spellbinding new novel presents the reader with an alternate version of The Artist: a woman of age who has created for herself, against enormous odds, a fulfilling life of thoroughly realized achievement.