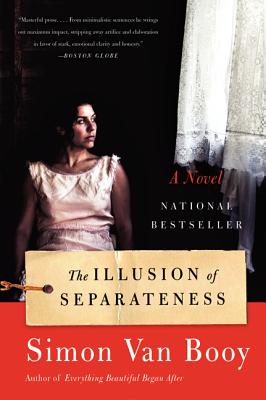 In The Illusion of Separateness, award-winning author Simon Van Booy tells a harrowing and enchanting story of how one man’s act of mercy during World War II changed the lives of strangers, and how they each discover the astonishing truth of their connection.

Whether they are pursued by Nazi soldiers, old age, shame, deformity, disease, or regret, the characters in this utterly compelling novel discover in their, darkest moments of fear and isolation that they are not alone, that they were never alone, that every human being is a link in an unseen chain.

The Illusion of Separateness intertwines the stories of unique and compelling characters who—through seemingly random acts of selflessness—discover the vital parts they have played in each other’s lives.

Simon Van Booy is the author of two novels and two collections of short stories, including The Secret Lives of People in Love and Love Begins in Winter, which won the Frank O'Connor International Short Story Award. He is the editor of three philosophy books and has written for The New York Times, The Guardian, NPR, and the BBC. His work has been translated into fourteen languages. He lives in Brooklyn with his wife and daughter.

“The uncanny beauty of Van Booy’s prose, and his ability to knife straight to the depths of a character’s heart, fill a reader with wonder….There are so many wonderful sentences in this book, a reviewer groans for want of room to list them.”
— San Francisco Chronicle

“His writing is consciously poetic and at times aphoristic, and he deftly portrays his characters’ raw emotions.”
— Wall Street Journal

“Van Booy writes like Hemingway but with more heart. It’s a gorgeous story about people whose lives are connected all because of a baby who is saved during World War II. Warning: don’t read this in public, or you might sob in front of strangers.”
— New Hampshire Public Radio

“Using restraint and a subtle dose of foreshadowing, Van Booy expertly entangles these disparate lives; but it’s what he leaves out that captures the imagination. Full of clever staccato sentences bookended by snippets of inner monologue -- obvious, but ripe with meaning, the writing is what makes this remarkable book soar.”
— Publishers Weekly (starred review)

“A spare, elliptical story of human connection, framed by the horror of World War II….The story snaps together beautifully. A brilliant if elusive novel that shows how a single act can echo through time.”
— Library Journal

“This short and deceptively simple novel, which affords the pleasure of discovering its well-wrought patterns, is likely to grow in stature as it lingers in memory.”
— Booklist