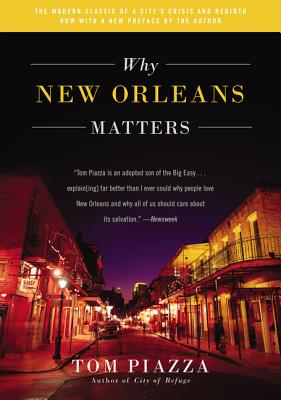 More than a decade after Hurricane Katrina, revisit Tom Piazza’s award-winning appraisal of a city in crisis—with a new afterword placing the story of New Orleans in the context of the ongoing threat to America’s coastal populations.

In the years since Hurricane Katrina devastated the city of New Orleans, Americans have learned much from the resilience of this proud, battered city. And yet, even as the city has regained some of its lost footing, other regions around the country continue to be battered by hurricanes, snow and ice storms, and massive weather events like Superstorm Sandy, which devastated the mid-Atlantic coast seven years later.

Published just months after the storm, Why New Orleans Matters was immediately hailed as a passionate and eloquent celebration of the city as both a cultural center and a home to millions of residents from varied—and sometimes precarious—walks of life. Award-winning author Tom Piazza, a longtime New Orleans resident, evoked the sensuous rapture of the city that gave us jazz music and Creole cooking, but also examined its deep undercurrents of corruption, racism, and injustice, and explored how its people endure and transcend those conditions. Perhaps most important, he asked that we all, as Americans consider our shared responsibility to this great and neglected metropolis and all the things it has shared with the world: its grace and beauty, resilience and soul.

In the years since its first publication, Piazza has continued to explore the story of New Orleans and its people in many ways—most notably in his novel City of Refuge and as a writer for the acclaimed HBO series Treme, created by David Simon. Now, he revisits Why New Orleans Matters—and, in an all-new foreword for this edition, re-examines the story of Katrina as a cautionary tale for a nation that has too often neglected both its treasures and, far more important, its people.

“Insightful… a sensory paradise... Why New Orleans Matters is a celebration of the spirit of New Orleans.” — BookInfo.net

“An enjoyable meander through what used to be called ‘the city that care forgot.’” — Houston Chronicle

“Hot and real and from the heart… An emotionally wrenching experience—at times hilarious, at times heartbreaking.” — New Orleans Times-Picayune

“Pensive and elegiac… sharp [and] steely. …A mournful dirge and a vivacious ode to the city.” — Atlanta Journal-Constitution

“A minor miracle unto itself… a heartfelt, 180-page manifesto… There’s a little something for everyone.” — Gambit Weekly

Humanities Book of the Year Award, Louisiana Endowment for the Humanities —