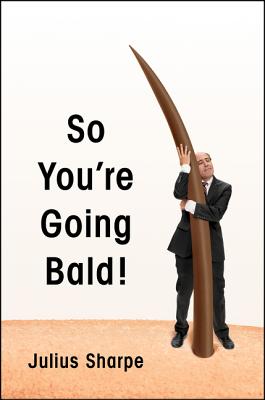 Educational, uplifting, and thoroughly hilarious, this rollicking “bald memoir” is a one-stop guide to appreciating life as you lose your hair, and offers dating, grooming, marriage, sex, and even toupee advice for bald men and the people who claim to love them.

Humorist and comedy television writer Julius Sharpe woke up on 9/11 to his own personal disaster: his hair was falling out. So You’re Going Bald is his hilarious odyssey—a tale filled with despair, horror, acceptance, and humor that everyone can relate to, whether you’re nineteen or approaching ninety—or are simply bald-curious.

As Julius tells it, going bald is for-real traumatic. Losing his hair preoccupied his days and kept him up Googling every night for five straight years. He suffered in private, but now he’s making it his mission that no cue ball will live alone with the agony of hair loss ever again. Sharpe examines what it means to be hairless up top, and walks you through how to look at yourself in the mirror and not want to die. He outlines the three stages of baldness (anger, more anger, even more anger), and volunteers himself as a guinea pig, testing laser helmets, plugs, and toupees. So You’re Going Bald is one-part tough love and one-part inspiration . . . the same way that Fran Drescher’s Cancer Schmancer inspired a cure for schmancer.

We all know someone who is bald, or going bald, or got their hair cut way too short. In So You’re Going Bald, Sharper provides an emotional roadmap for living life in the bald lane, giving voice to what it feels like to know that “grass doesn’t grow on a busy street.”

Julius Sharpe is a writer, comedian, and the official self-appointed spokesman of the bald community. He has written for "The Cleveland Show," "Family Guy," "The Grinder," and created "Making History" for Fox. He is an experienced stand-up comic, and has appeared on several late-night talk shows, including "The Late Late Show" and Jimmy Kimmel and George Lopez.  He lives in Los Angeles. This is his first book. He is bald, mostly.