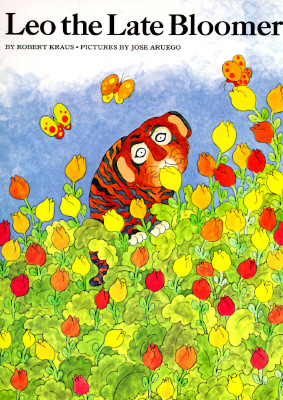 This heartwarming story of how a little tiger named Leo bloomed is told by bestselling author Robert Kraus and is accompanied by the wonderfully bold illustrations of Jose Aruego.

“Captivating and rollicking.” —The Horn Book

Leo isn't reading, or writing, or drawing, or even speaking, and his father is concerned. But Leo's mother isn't. She knows her son will do all those things, and more, when he's ready.

With its message of patience and humor, Leo the Late Bloomer is more timely than ever. As Children's Books and Their Creators commented: "Leo's reassuring 'I made it!' at the end delights young listeners who may have been scrutinized for early blooming by well-intentioned moms and dads. Deserves space on any parenting shelf."

Robert Kraus is the author of Little Louie the Baby Bloomer and Leo the Late Bloomer, illustrated by Jose Aruego, and the author and illustrator of dozens of books for children.

Jose Aruego’s books for young readers have earned the applause of critics, teachers, librarians, and parents—as well as the affection of children everywhere. Mr. Aruego’s comic animals are immediately recognizable as they cavort through clear, vibrant landscapes, carrying out the action that the simple text has set in motion. It is a style one reviewer has termed “illustrative mime.”

Jose Aruego was born in the Philippines, where he studied law. But after practicing briefly, he decided to come to the United States to study graphic arts and advertising at Parsons School of Design in New York City. After graduation, he worked in advertising before taking up the demanding job of cartooning for The Saturday Evening Post, The New Yorker, Look, and other magazines.

Mr. Aruego said: “Every Wednesday I would go to the cartoon editor with fifteen or sixteen drawings in hand, from which he might select one for publication. The tension was terrible, because selling cartoons was how I made my living. But I learned a lot from the rejected work, so it wasn’t a waste. The sink-or-swim experience of drawing cartoons was how I learned to make the most of a small amount of space.” Both abilities have helped him in his career as a children’s book author and illustrator, which he began with the publication of The King and His Friends in 1969.

Although he is known for his amusing characters, Jose Aruego takes writing and drawing for children very seriously. After more than three dozen books he feels he is still learning his craft and getting to know his audience. From the popularity and appeal of Jose Aruego’s books, it is obvious that he has both the artistic skill and the imagination to reach the world of children. His work has a distinctive rhythm, and his humorous animal characters have a gaiety and playfulness that children adore.

“Each project teaches me something new and makes me a better artist. Each book brings me closer to children,” he said. “I have found from making appearances at schools that when kids draw for themselves, most of them like to make funny pictures. So I show them how to draw an alligator. It’s a simple drawing and the teachers tell me that after my visit, Aruego alligators show up all over the school.”

“Captivating and rollicking.” — The Horn Book

“A humorous morale-boosting tale with great appeal.” — ALA Booklist

“This engaging story with its bright jungle scenery (and appealing animal characters) is sure to charm the late bloomer in your family.” — Publishers Weekly

“Reassuring for other late bloomers, this book is illustrated with beguiling pictures.”   — Saturday Review