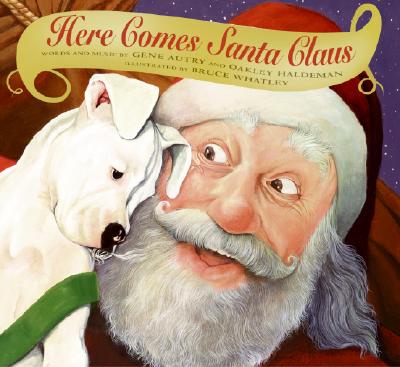 Gene Autry (1907-1998), the legendary singing cowboy of the 1930s, '40s, and '50s, won the hearts of Americans with his golden voice and rugged good looks. He became one of the most popular actors of his day, playing Everyman western heroes in scores of films as well as on radio and television shows.

Autry also wrote, or cowrote, over two hundred songs, including "Back in the Saddle Again," and recorded an impressive string of holiday classics, including "Rudolph the Red-Nosed Reindeer," "Here Comes Santa Claus," "Frosty the Snowman," and "Here Comes Peter Cottontail." High among his many awards and honors were induction into the Country Music Hall of Fame and the National Cowboy Hall of Fame, five stars on the Hollywood Walk of Fame, and a town in Oklahoma that was named after him. In later life, he was as successful a businessman and producer as he had been a performer and served as the driving force behind the creation of the Autry Museum of Western Heritage.

Bruce Whatley  is one of Australia's most highly regarded and talented authors and illustrators for children, both here and internationally. Bruce started his working life in advertising as an art director and illustrator and since then he has created over 60 picture books.  Many of his books have won awards both in Australia and overseas, including The Ugliest Dog in the World, Looking for Crabs, Tails from Grandad’s Attic and Detective Donut and the Wild Goose Chase.

In 2002 Bruce paired with author Jackie French and illustrated Diary of a Wombat – an iconic picture book that has become an international best-seller with foreign sales to nine territories.  Diary of Wombat was the start of an extraordinary artistic collaboration that sparked the publication of Pete the Sheep, Josephine Wants to Dance, Shaggy Gully Times, Baby Wombat’s Week, Christmas Wombat and Wombat Goes to School. Plus two delightful books about Queen Victoria, being Queen Victoria’s Underpants and Queen Victoria’s Christmas.

One of the most remarkable aspects of Bruce’s talent is the breadth of his artistic ability, which includes an appealing cartoon style to realistic representations using mediums ranging from coloured pencils, watercolour, acrylic and oils, and more recently, 3D digital software.

And accompanying that talent is an intellectual depth and curiosity that sees Bruce taking on large and complex projects, such as The Beach They Called Gallipoli, which is being co-created with Jackie French and will be published in 2014 to coincide with the centenary of WW1.

In 2008 Bruce completed his PhD titled Left Hand Right Hand: implications of ambidextrous image making. In his thesis Bruce looked at the image making of the non-dominant hand, making the fascinating discovery that in most people the ability to draw lies in the use of the ‘other’ hand.