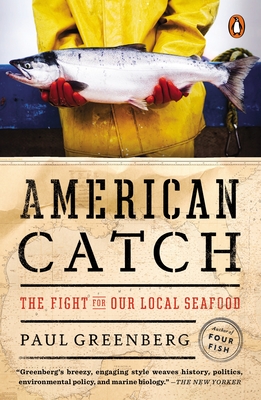 By Paul Greenberg
$21.06
Email or call for price

From the acclaimed author of Four Fish and The Omega Principle, Paul Greenberg uncovers the tragic unraveling of the nation’s seafood supply—telling the surprising story of why Americans stopped eating from their own waters in American Catch

In 2005, the United States imported five billion pounds of seafood, nearly double what we imported twenty years earlier. Bizarrely, during that same period, our seafood exports quadrupled. American Catch examines New York oysters, Gulf shrimp, and Alaskan salmon to reveal how it came to be that 91 percent of the seafood Americans eat is foreign.

In the 1920s, the average New Yorker ate six hundred local oysters a year. Today, the only edible oysters lie outside city limits. Following the trail of environmental desecration, Greenberg comes to view the New York City oyster as a reminder of what is lost when local waters are not valued as a food source.

Farther south, a different catastrophe threatens another seafood-rich environment. When Greenberg visits the Gulf of Mexico, he arrives expecting to learn of the Deepwater Horizon oil spill’s lingering effects on shrimpers, but instead finds that the more immediate threat to business comes from overseas. Asian-farmed shrimp—cheap, abundant, and a perfect vehicle for the frying and sauces Americans love—have flooded the American market.

Finally, Greenberg visits Bristol Bay, Alaska, home to the biggest wild sockeye salmon run left in the world. A pristine, productive fishery, Bristol Bay is now at great risk: The proposed Pebble Mine project could under¬mine the very spawning grounds that make this great run possible. In his search to discover why this pre¬cious renewable resource isn’t better protected, Green¬berg encounters a shocking truth: the great majority of Alaskan salmon is sent out of the country, much of it to Asia. Sockeye salmon is one of the most nutritionally dense animal proteins on the planet, yet Americans are shipping it abroad.

Despite the challenges, hope abounds. In New York, Greenberg connects an oyster restoration project with a vision for how the bivalves might save the city from rising tides. In the Gulf, shrimpers band together to offer local catch direct to consumers. And in Bristol Bay, fishermen, environmentalists, and local Alaskans gather to roadblock Pebble Mine. With American Catch, Paul Greenberg proposes a way to break the current destructive patterns of consumption and return American catch back to American eaters.

PAUL GREENBERG is the author of the James Beard Award–winning bestseller Four Fish: The Future of the Last Wild Food and a regular contributor to the New York Times. He has been featured on NPR’s Fresh Air and All Things Considered and has lectured widely on ocean issues at institutions ranging from Google to Yale to the U.S. Senate. He is currently a Pew fellow in Marine Conservation and a fellow with the Blue Ocean Institute.

The Wall Street Journal
"This is Mr. Greenberg's ultimate goal--to get us to eat the seafood from our nation's bounty. He points to the remarkable fact that, "while 91 percent of the seafood Americans eat is foreign, a third of the seafood Americans catch gets sold to foreigners." In addition, he points out, "Americans now harvest our best, most nutritious fish in our best-managed Alaskan fisheries and send those fish over to Asia. In exchange, we are importing fish farmed in Asia, with little of the brain-building compounds fish eaters are seeking when they eat fish.""

The Boston Globe
"Greenberg describes a wondrous moment — in the Bronx, of all places; while in search of reintroduced specimen he stumbles on “a real live, naturally spawned New York City oyster . . . [a] brave sentry from a lost kingdom.” Greenberg is at his best describing such epiphanies — he also writes beautifully about fishing for salmon in Alaska, which offers up similar reveries."

Tom Colicchio:
"This is on the top of my summer reading list: A Fast Food Nation for fish.”

Kirkus Reviews:
"Blue Ocean Institute fellow Greenberg (Four Fish: The Future of the Last Wild Food, 2010, etc.) offers an optimistic perspective on the connection between preserving our salt marshes and restoring America's offshore seafood production. The author presents three illustrative case studies: the effort to bring oysters back to our Eastern shores, the threat to Alaska's wild salmon industry from mining interests, and the effect of globalization on Gulf Coast shrimp. A fascinating discussion of a multifaceted issue and a passionate call to action."