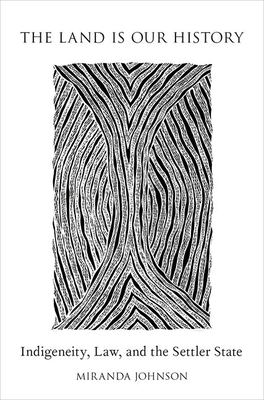 By Miranda Johnson
$229.10
Email or call for price

The Land Is Our History tells the story of indigenous legal activism at a critical political and cultural juncture in Australia, Canada, and New Zealand. In the late 1960s, indigenous activists protested assimilation policies and the usurpation of their lands as a new mining boom took off,
radically threatening their collective identities. Often excluded from legal recourse in the past, indigenous leaders took their claims to court with remarkable results. For the first time, their distinctive histories were admitted as evidence of their rights. Miranda Johnson examines how indigenous peoples advocated for themselves in courts and commissions of inquiry between the early 1970s to the mid-1990s, chronicling an extraordinary and overlooked history in which virtually disenfranchised peoples forced powerful settler democracies to reckon with
their demands. Based on extensive archival research and interviews with leading participants, The Land Is Our History brings to the fore complex and rich discussions among activists, lawyers, anthropologists, judges, and others in the context of legal cases in far-flung communities dealing with
rights, history, and identity. The effects of these debates were unexpectedly wide-ranging. By asserting that they were the first peoples of the land, indigenous leaders compelled the powerful settler states that surrounded them to negotiate their rights and status. Fracturing national myths and
making new stories of origin necessary, indigenous peoples' claims challenged settler societies to rethink their sense of belonging.

Miranda Johnson is a lecturer in history at the University of Sydney.