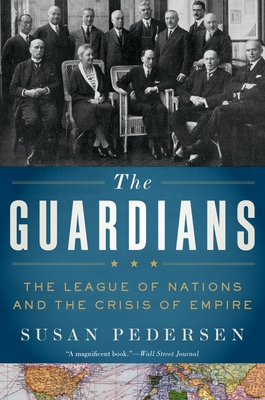 At the end of the First World War, the Paris Peace Conference saw a battle over the future of empire. The victorious allied powers wanted to annex the Ottoman territories and German colonies they had occupied; Woodrow Wilson and a groundswell of anti-imperialist activism stood in their way.
France, Belgium, Japan and the British dominions reluctantly agreed to an Anglo-American proposal to hold and administer those allied conquests under mandate from the new League of Nations. In the end, fourteen mandated territories were set up across the Middle East, Africa and the Pacific.
Against all odds, these disparate and far-flung territories became the site and the vehicle of global transformation. In this masterful history of the mandates system, Susan Pedersen illuminates the role the League of Nations played in creating the modern world. Tracing the system from its creation in 1920 until its demise in 1939, Pedersen examines its workings from the realm of international diplomacy; the
viewpoints of the League's experts and officials; and the arena of local struggles within the territories themselves. Featuring a cast of larger-than-life figures, including Lord Lugard, King Faisal, Chaim Weizmann and Ralph Bunche, the narrative sweeps across the globe-from windswept scrublands
along the Orange River to famine-blighted hilltops in Rwanda to Damascus under French bombardment-but always returns to Switzerland and the sometimes vicious battles over ideas of civilization, independence, economic relations, and sovereignty in the Geneva headquarters. As Pedersen shows, although
the architects and officials of the mandates system always sought to uphold imperial authority, colonial nationalists, German revisionists, African-American intellectuals and others were able to use the platform Geneva offered to challenge their claims. Amid this cacophony, imperial statesmen began
exploring new means - client states, economic concessions - of securing Western hegemony. In the end, the mandate system helped to create the world in which we now live. A riveting work of global history, The Guardians enables us to look back at the League with new eyes, and in doing so, appreciate how complex, multivalent, and consequential this first great experiment in internationalism really was.

Susan Pedersen is Professor and James P. Shenton Professor of the Core Curriculum at Columbia University. She specializes in British history, the British Empire, comparative European history, and international history. She is the author of several books, including Eleanor Rathbone and the Politicsof Conscience.