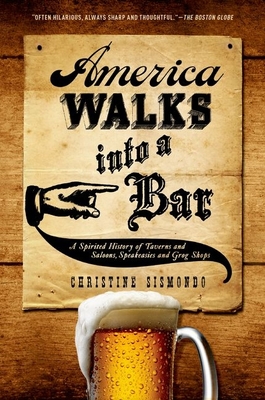 When George Washington bade farewell to his officers, he did so in New York's Fraunces Tavern. When Andrew Jackson planned his defense of New Orleans against the British in 1815, he met Jean Lafitte in a grog shop. And when John Wilkes Booth plotted with his accomplices to carry out an assassination, they gathered in Surratt Tavern. In America Walks into a Bar, Christine Sismondo recounts the rich and fascinating history of an institution often reviled, yet always central to American life. She traces the tavern from England to New England, showing how even the Puritans valued a good Beere. With fast-paced narration and lively characters, she carries the story through the twentieth century and beyond, from repeated struggles over licensing and Sunday liquor sales, from the Whiskey Rebellion to the temperance movement, from attempts to ban treating to Prohibition and repeal. As the cockpit of organized crime, politics, and everyday social life, the bar has remained vital--and controversial--down to the present. In 2006, when the Hurricane Katrina Emergency Tax Relief Act was passed, a rider excluded bars from applying for aid or tax breaks on the grounds that they contributed nothing to the community. Sismondo proves otherwise: the bar has contributed everything to the American story. Now in paperback, Sismondo's heady cocktail of agile prose and telling anecdotes offers a resounding toast to taprooms, taverns, saloons, speakeasies, and the local hangout where everybody knows your name.

Christine Sismondo is a writer and lecturer in Humanities at York University in Toronto. She has written numerous articles about film, literature, drinking, and vice, as well as the book Mondo Cocktail, a narrative history of cocktails.