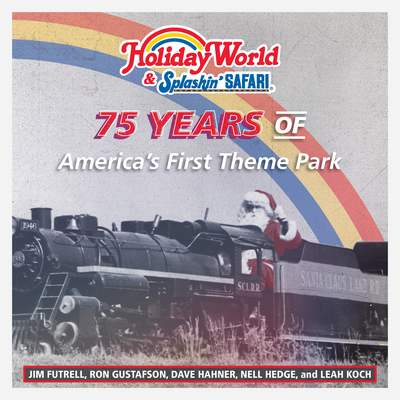 America's first theme park, Holiday World & Splashin' Safari, is one of the largest family-owned and -operated independent parks in the United States, and its success is no accident. From moving Interstate 64 closer to the small town to introducing free unlimited soft drinks, four generations of the Koch family have amplified the legacy of this iconic Indiana attraction.

Holiday World & Splashin' Safari celebrates the history of the Koch family and Santa Jim Yellig; the origins of Santa Claus, Indiana; and the early years of Santa Claus Land. The story continues with the expansion from Santa Claus Land to Holiday World, the addition of the park's famous trio of top-ranked wooden roller coasters, and the development of Splashin' Safari Water Park, ranked one of the top water parks in the country.

For three-quarters of a century, the Koch family has launched the park into worldwide renown and national recognition. Featuring over 100 color illustrations, Holiday World & Splashin' Safari relives this joyous past while looking forward to the thrills fans can expect in the next 75 years.

Jim Futrell has spent over 40 years documenting the industry, authoring over 70 articles for industry trade publications, along with dozens for National Amusement Parks Historical Association Chronicle. Ron Gustafson is an award-winning journalist and photojournalist who has covered the industry for nearly 50 years. His work has been published in trade journals, magazines, and newspapers worldwide. Dave Hahner has been a huge fan of amusement parks and roller coasters his entire life and has written several historical articles on them over the years for American Coaster Enthusiasts and other enthusiast organization publications. Nell Hedge is executive director of the Santa Claus Museum & Village in Santa Claus, Indiana. She graduated from Indiana University with a bachelor's degree in tourism management and has experience in education, communications, and community outreach. Leah Koch represents the fourth generation of Koch family members to own and operate Holiday World & Splashin' Safari. Leah became director of communications in 2019.