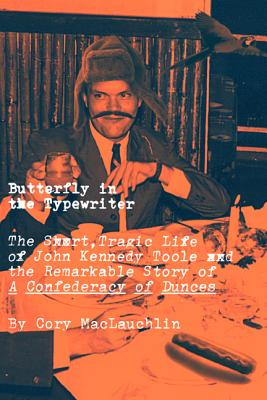 By Cory Maclauchlin
Email or call for price
Out of Print

The saga of John Kennedy Toole is one of the greatest stories of American literary history. After writing A Confederacy of Dunces, Toole corresponded with Robert Gottlieb of Simon & Schuster for two years. Exhausted from Gottlieb's suggested revisions, Toole declared the publication of the manuscript hopeless and stored it in a box. Years later he suffered a mental breakdown, took a two-month journey across the United States, and finally committed suicide on an inconspicuous road outside of Biloxi. Following the funeral, Toole's mother discovered the manuscript. After many rejections, she cornered Walker Percy, who found it a brilliant novel and spearheaded its publication. In 1981, twelve years after the author's death, A Confederacy of Dunces won the Pulitzer Prize.

In Butterfly in the Typewriter, Cory MacLauchlin draws on scores of new interviews with friends, family, and colleagues as well as full access to the extensive Toole archive at Tulane University, capturing his upbringing in New Orleans, his years in New York City, his frenzy of writing in Puerto Rico, his return to his beloved city, and his descent into paranoia and depression.

Cory MacLauchlin is a producer, biographer, and member of the English Faculty at Germanna Community College. He lives in northern Virginia with his wife and son.

Kirkus Reviews, 3/15/12
“[MacLauchlin] cleanly lays out the brief life of his subject and his work’s unlikely afterlife…A valuable biography”

BookPage, April Issue“[A] highly readable biography…It does an impressive job filling in the gaps and helping readers better understand this complex writer.” Yahoo! Shine, 3/18/12
“Author Cory MacLauchlin provides a well-documented, highly objective, step-by-step track of Toole's too-short life.” San Diego Union Tribune, 3/30/12
“A complete telling of the sad but triumphant story…The life that unfolds here is full of contrasts: laughter and pain, popularity and isolation, failure and success.” LitReactor.com, 4/11“In addition to being the most comprehensive and accurate biography about the man so far, it's also a gripping read”
Blurt-Online, 4/19/12
“An impressive new biography…MacLauchlin makes Toole come alive by providing illuminating glimpses into his life and clearing up much of the fog surrounding his death.” Publishers Weekly, 4/23/12
“[A] thoughtful and thorough biography…MacLauchlin does an admirable job distinguishing facts from speculation.” New City, 5/1/12“Butterfly in the Typewriter is as close to unraveling the enigma of the often-mysterious John Kennedy Toole as we are ever likely to read, and his story makes for an engrossing read.” Shepherd Express, 5/2/12
“A fascinating account of Toole's short, intense life…For anyone carrying more than a passing interest in A Confederacy of Dunces, this bio is, of course, a must-read.” Cleveland Plain Dealer, 5/11/12“For anybody who has faced rejection (and who hasn’t?), this book contains a lifetime worth of wisdom.” Buffalo News, 5/6/12
“This is a sad story well-told” Deep South Magazine,6/1/12“MacLauchlin has created a book that is literary, erudite and accessible all at the same time. He has married scholarship with storytelling, which is not an easy feat.” Atlanta Journal Constitution, 5/29/12“Cory MacLauchlin’s fair-minded biography unpacks one myth at a time…Along with its portrait of a complicated, conflicted and flawed young writer, Butterfly in the Typewriter provides a comprehensive look at Toole’s childhood, college years, his army posting in Puerto Rico and his lifelong love affair with New Orleans.” Winnipeg Free Press, 5/27/12“A balanced and sensitive biography of Toole, is very much the stuff of movies”Washington Times, 6/8/12“[An] exhaustive biography…Required reading for anyone interested in this enigmatic literary figure; indeed, in Southern literature in general.”

VanityFair.com, 7/25/12“It’s an exhaustively researched chronicle of the remarkable life of John Kennedy O’Toole…MacLauchlin’s story…is heartbreaking…I implore you to read the novel and A Butterfly in the Typewriter now, to meet the man and Ignatius yourself before it’s too late.”

Library Journal, 8/03/12“The reader experiences the life and death of Toole, as well as the amazing journey that the manuscript of A Confederacy of Dunces took long after its author was gone….[MacLauchlin] shows a connection to and understanding of Toole that translates to readers, making them feel as if they, too, have entered Toole’s mind and are with him through his ups and downs…MacLauchlin has a deep understanding of Toole without making any unfounded assumptions…Recommended to all literary biography collections and necessary for all those studying the prominent cultural figures of New Orleans.”
The Advocate, 8/14/12“MacLauchlin does this tragic story justice, producing a gripping biography worth reading."