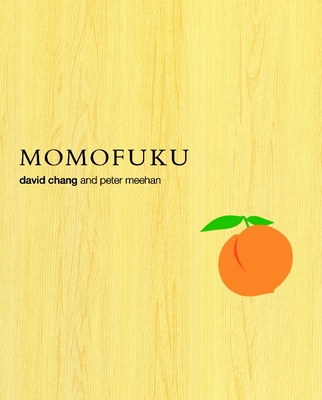 With 200,000+ copies in print, this New York Times bestseller shares the story and the recipes behind the chef and cuisine that changed the modern-day culinary landscape.

Never before has there been a phenomenon like Momofuku. A once-unrecognizable word, it's now synonymous with the award-winning restaurants of the same name in New York City (Momofuku Noodle Bar, Ssäm Bar, Ko, Má Pêche, Fuku, Nishi, and Milk Bar), Toronto, and Sydney. Chef David Chang single-handedly revolutionized cooking in America and beyond with his use of bold Asian flavors and impeccable ingredients, his mastery of the humble ramen noodle, and his thorough devotion to pork.

Chang relays with candor the tale of his unwitting rise to superstardom, which, though wracked with mishaps, happened at light speed. And the dishes shared in this book are coveted by all who've dined—or yearned to—at any Momofuku location (yes, the pork buns are here). This is a must-read for anyone who truly enjoys food.

David Chang is the chef and founder of Momofuku. Since opening Momofuku Noodle Bar in New York City in 2004, he has been honored with six James Beard Awards, including Outstanding Chef, and has been recognized as a Time 100 honoree. His cookbook, Momofuku, is a New York Times bestseller. In 2018, David founded Majordomo Media and launched The Dave Chang Show podcast. He is the host of two Netflix original documentary series, Ugly Delicious and Breakfast, Lunch & Dinner.

Peter Meehan has written for the New York Times, Saveur, and Travel + Leisure and has collaborated on several books.

“David Chang is magical–that’s why it’s so difficult to explain what he does. I can only tell you that you need to experience his cooking; it will move you deeply. He is a chef of prodigious talent–and also a great guy.” —Ferran Adrià

“The breathless hype is true. His food is as good and as exciting as everyone says it is. David Chang has opened up a new direction in dining and cooking. With his troika of Momofukus, he changed the whole game. Scary-smart, funny, and ambitious, the wildly creative Chang is the guy all chefs have got to measure themselves by these days.” —Anthony Bourdain

“As a food professional I am always on the look out for the new, the different, and the delicious. It was with great pleasure that one day I tasted David Chang’s pork buns at Momofuku. Since then, I have sampled almost all of his delectable creations and I am so pleased that I finally have a book of recipes that will allow me to try to emulate them at home.” —Martha Stewart

“[Chang is] at the forefront of the modern pork-meat-rules movement. Some of the recipes are very simple, but even the ones that are too involved for the home cook offer a fascinating window into the mind of Chang.” –Newsday

“One of the most talked-about restaurant books of the season is David Chang’s Momofuku…. It’s exciting to think that thousands of American kitchens will soon be stocked with dashi, kochukaru and fish sauce…. In both food and tone, Momofuku encapsulates an exciting moment in New York dining.” –New York Times Book Review

“Chang’s latest, perfectly timed move is his first cookbook. Like his restaurants, the book’s generosity of spirit and lack of pretension will, I suspect, outwit the hyperpicky bitchery that hype tends to unleash. Useful flavor-amping recipes that range from sensible and easy (scallion oil) to advanced (“ghetto sous vide” steak) are broken up by insightful ingredient histories, how-tos, and vicariously thrilling autobiographical anecdotes…” –Elle magazine

“Broken into three categories from Chang’s three Momofuku restaurants—Noodle Bar, Ssam Bar and Ko—all the good stuff is in the book: from Chang’s famous pork buns to pig’s head torchon to the ramen that started it all.” –New York Daily News

“…Mr. Chang, with assistance from Peter Meehan, who has written for The New York Times, writes about a chef’s life in a way that feels completely fresh. The recipes, including those from the ginger-scallion noodles and roasted pork belly served at Noodle Bar, are almost perks; this would be a great read even without them.” –New York Times

“A recipe for bacon dashi—a basic stock used in several of the book’s recipes—reflects Mr. Chang’s blending of the familiar with the entirely new…. The result is a delicious brew that captures the clean brininess of Japanese cuisine and the finger-licking tastiness of American food.” –Wall Street Journal

“…[T]his book offers something that you can’t get at Chang’s restaurants: a chance to get into the mind of one of America’s most interesting chefs.” –Fine Cooking

“…Momofuku is a must-have, if not only for its faux-wood-paneled cover and signature peach on the front. Inside, it’s what we’ve all been waiting for: some good, solid time with Chang in his element…and a peek into the philosophy that helped make him one of the most sought-after chefs in the country without any help from the Food Network.” –Manhattan magazine

“The most exciting cookbook of the season, to me, is without question, Momofuku, by David Chang and Peter Meehan. Momofuku combines great cooking and restaurant kitchen photography in the journalistic style I love, recipes and techniques I was eager to learn about…and an intense, passionate narrative by Meehan that captures the distinctive nature of this unusual chef.” –Michael Ruhlman

“I read this cookbook with the same exhilarating glee I previously had only experienced with my favorite novels. It’s the whole package: great recipes, great design, great story, great telling. This is going to be the French Laundry Cookbook for the next generation of chefs and cooks.” –EatMeDaily.com, Best Overall Cookbook of 2009

“…the read is as intriguing as the food.” –Charleston Post and Courier

“Let me come right out and say it: David Chang is the best chef this country’s ever produced…. Chang’s collaborator, former New York Times columnist Peter Meehan, has done a superb job of shaping the material and letting Chang be Chang…. But it would be hard for any passionate cook, or artist, or anyone who’s interested in the creative process, not to devour this book.” –Denver Post