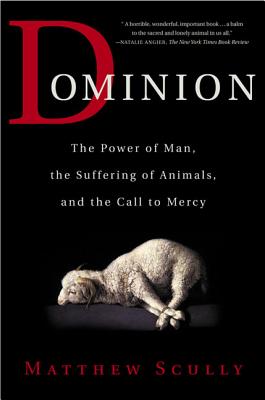 "And God said, Let us make man in our image, after our likeness; and let them have dominion over the fish of the sea, and over the fowl of the air, and over the cattle, and over all the earth, and over every creeping thing that creepeth upon the earth."--Genesis 1:24-26

In this crucial passage from the Old Testament, God grants mankind power over animals. But with this privilege comes the grave responsibility to respect life, to treat animals with simple dignity and compassion.

Somewhere along the way, something has gone wrong.

In Dominion, we witness the annual convention of Safari Club International, an organization whose wealthier members will pay up to $20,000 to hunt an elephant, a lion or another animal, either abroad or in American "safari ranches," where the animals are fenced in pens. We attend the annual International Whaling Commission conference, where the skewed politics of the whaling industry come to light, and the focus is on developing more lethal, but not more merciful, methods of harvesting "living marine resources." And we visit a gargantuan American "factory farm," where animals are treated as mere product and raised in conditions of mass confinement, bred for passivity and bulk, inseminated and fed with machines, kept in tightly confined stalls for the entirety of their lives, and slaughtered in a way that maximizes profits and minimizes decency.

Throughout Dominion, Scully counters the hypocritical arguments that attempt to excuse animal abuse: from those who argue that the Bible's message permits mankind to use animals as it pleases, to the hunter's argument that through hunting animal populations are controlled, to the popular and "scientifically proven" notions that animals cannot feel pain, experience no emotions, and are not conscious of their own lives.

The result is eye opening, painful and infuriating, insightful and rewarding. Dominion is a plea for human benevolence and mercy, a scathing attack on those who would dismiss animal activists as mere sentimentalists, and a demand for reform from the government down to the individual. Matthew Scully has created a groundbreaking work, a book of lasting power and importance for all of us.

Matthew Scully served from January 2001 until June 2002 as special assistant and senior speechwriter to President George W. Bush. He worked in the president's 2000 campaign and has also written for vice presidents Dan Quayle and Dick Cheney, and for the late Pennsylvania governor Robert P. Casey. A former literary editor for the National Review, he has been published in various periodicals including The New York Times, The Washington Post, and The Wall Street Journal. He is the author of Dominion: The Power of Man, the Suffering of Animals, and the Call to Mercy. He lives with his wife, Emmanuelle, in northern Virginia.

“Scully's riveting account... shows how unspeakable and systematic animal cruelty is the currency of a soulless industry that has shattered American rural communities, poisoned our soils, air, and water, made family farmers an endangered species, and undermined our democracy. Scully's book gently questions whether we can foster human dignity in a society that treats other sentient beings as production units.” —Robert F. Kennedy, Jr.

“Matthew Scully has set forth a case - in a wry and riveting manner - that will resonate with any reader who values logical reasoning and ethical conduct. I expect that Dominion will be the most influential book on animal protection in the last twenty-five years.” —Wayne Pacelle, Senior Vice President, The Humane Society of the United States