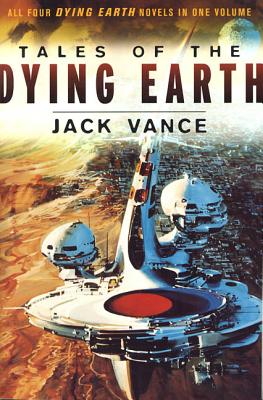 This is book number 1 in the Dying Earth series.

Jack Vance is one of the most remarkable talents to ever grace the world of science fiction. His unique, stylish voice has been beloved by generations of readers. One of his enduring classics is his 1964 novel, The Dying Earth, and its sequels--a fascinating, baroque tale set on a far-future Earth, under a giant red sun that is soon to go out forever.

A must-read for every Science Fiction fan.

Jack Vance, born John Holbrook Vance in 1916, was one of the greatest masters of fantasy and science fiction. He was the winner of many awards for his work and career: the Damon Knight Memorial Grand Master Award from the Science Fiction and Fantasy Writers of America, and the World Fantasy Award for Life Achievement. Among his awards for particular works were the Hugo award in 1963 for The Dragon Masters, in 1967 for The Last Castle, and in 2010 for his memoir This is Me, Jack Vance! He won a Nebula Award in 1966 for The Last Castle. He won the World Fantasy Award for Best Novel in 1990 for Lyonesse: Madouc. He also won an Edgar for the best first mystery novel in 1961 for The Man in the Cage. Vance published more than 60 books in his career, sometimes under pseudonyms. Among them were eleven mystery novels, three of them as Ellery Queen. He wrote some of the first, and perhaps best, examples of "planetary adventures", including a novel called Big Planet. His “Dying Earth” series were among the most influential fantasy novels ever written, inspiring both generations of writers, and the creators of Dungeons and Dragons.
Vance’s series from Tor include The Demon Princes, The Cadwal Chronicles, The Dying Earth, The Planet of Adventure, and Alastor. Vance’s last novels were a series of two: Ports of Call and Lurulu.
Jack Vance was a sailor, a writer, an adventurer, a music critic, and a raconteur. He died in May 2013.

“You can't possibly pass up any book by Jack Vance . . . He has perfected the trick of creating new worlds so deceptively real that after a while your own home seems imaginary.” —Jerry Pournelle

“There is a flavor to [Vance's] work that you can't find elsewhere, an underlying current of good humor and quick-wittedness that makes you reluctant to turn that last page and return to a far less interesting reality.” —Science Fiction Chronicle

“Vance has virtually no peer when it comes to creating sophisticated yet decadent worlds.” —Starlog

“Vance demonstrates his talent for creating exotic and sometimes bizarre cultures that offer ironic commentary on the excesses and foibles of human society. The author's arch prose and dry humor have won him an avid following.” —Library Journal

“The works of Jack Vance have boasted an ardent following for the past four decades, and his newest should be cause for rejoicing among the faithful. The remarkable high consistency of Vance's poetic writing, coupled with his extraordinary visions of exotic planets, is one of the treasures of speculative fiction.” —Washington Post Book World