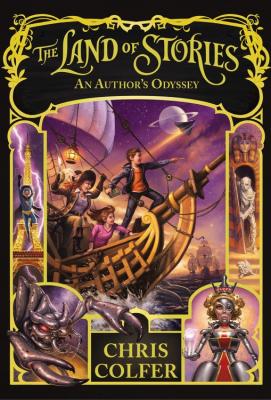 This is book number 5 in the The Land of Stories series.

The Masked Man has captured all the royal families from the Land of Stories with the help of his army of literature's greatest villains, including the Wicked Witch of the West, the Queen of Hearts, and Captain Hook. With his sinister plan finally in motion, he is eager to destroy the families and take his place as emperor.

Alex and Conner know they are no match against the Masked Man's legion of villains, but they realize that they may be in possession of the greatest weapon of all: their own imaginations! So begins the twins' journey into Conner's very own stories to gather an army of pirates, cyborgs, superheroes, and mummies as they band together for the ultimate fight against the Masked Man.

Meanwhile, an even more dangerous plan is brewing--one that could change the fates of both the fairy-tale world and the Otherworld forever.

Chris Colfer is a #1 New York Times bestselling author and Golden Globe-winning actor. He was honored as a member of the TIME 100, Time magazine’s annual list of the one hundred most influential people in the world, and his books include Struck By Lightning: The Carson Phillips Journal, Stranger Than Fanfiction, the books in The Land of Stories series: The Wishing Spell, The Enchantress Returns, A Grimm Warning, Beyond the Kingdoms, An Author’s Odyssey, and Worlds Collide, the companion books A Treasury of Classic Fairy Tales, The Mother Goose Diaries, Queen Red Riding Hood’s Guide to Royalty, The Curvy Tree, Trollbella Throws a Party, and Goldilocks: Wanted Dead or Alive, and the books in the A Tale of Magic… series: A Tale of Magic…, A Tale of Witchcraft…, and A Tale of Sorcery…. He invites you to visit him online at thelandofstories.com or on Instagram and Twitter @chriscolfer.