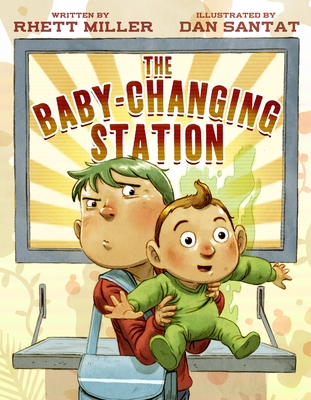 Acclaimed singer-songwriter Rhett Miller teams up again with Caldecott Medalist and bestselling artist Dan Santat in a laugh-out-loud rhyming story about an older sibling who gets an opportunity to trade his younger brother for cool stuff when he finds a magical baby changing station.

Before Joe rolled in / I was the ten-year-old King / of all I surveyed / Now that he’s here / It’s perfectly clear / That I / am in the way.

James is NOT a fan of his new little brother, Joe. His parents adore Joe and don’t have time for James anymore. What is an older sibling supposed to do?!

When James stumbles upon a baby-changing station that can exchange younger siblings for much more exciting things, he is faced with endless options. Should he choose the night-vision googles, a cool chemistry set, a guitar, or keep his baby brother? James is put through the ultimate test until he realizes that being a big brother is not so bad after all.

With sly humor, playful rhymes, and dynamic art, The Baby-Changing Station celebrates the timeless theme of older-younger sibling rivalry with a humorous magical twist perfect for readers of all ages.

Rhett Miller is a singer-songwriter known for fronting the popular rock band Old 97’s who has also released seven solo albums, most recently 2018’s The Messenger. In addition to songwriting, Rhett has branched out to write short stories, essays, and articles that have been featured in Rolling Stone, Sports Illustrated, McSweeney’s, the Atlantic, and Salon. His first children’s book was No More Poems, also illustrated by Dan Santat. When not on tour, Rhett resides in New Paltz, New York, with his wife and two children.

Dan Santat is the Caldecott Medal–winning and New York Times bestselling creator of The Adventures of Beekle, Are We There Yet?, and After the Fall as well as the illustrator of many other picture books, including No More Poems by Rhett Miller, the Crankenstein series by Samantha Berger, and Drawn Together and Lift written by Minh Lê. Dan lives in Southern California with his wife and two children.

"A triumph of imagination...Miller and Santat deliver a super-fun, original and solidly constructed story with an adorable and climactic conclusion."—The New York Times

"But each tempting choice makes James ponder a future without his brother as a comrade or co-conspirator (“More often than not,/ Siblings who rock/ Make the best bands, says my father”), leading him to realize that “though he’s my nemesis/ I see a world in which/ He and I someday are friends.” The idea of a kid taking on his parents’ duties may not sit well with all readers, but Santat’s (The Blur) generously scaled, operatically expressive pencil and watercolor art and Miller’s(No More Poems!) age-appropriate weltschmerz propel the story forward, making for a contemporarily poo-laden twist on a Faustian bargain."—Kirkus Reviews