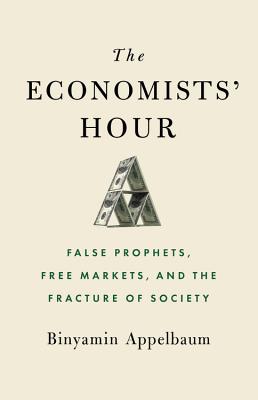 By Binyamin Appelbaum
$30.00
Email or call for price

In this "lively and entertaining" history of ideas (Liaquat Ahamed, The New Yorker), New York Times editorial writer Binyamin Appelbaum tells the story of the people who sparked four decades of economic revolution.
Before the 1960s, American politicians had never paid much attention to economists. But as the post-World War II boom began to sputter, economists gained influence and power.
In The Economists' Hour, Binyamin Appelbaum traces the rise of the economists, first in the United States and then around the globe, as their ideas reshaped the modern world, curbing government, unleashing corporations and hastening globalization.
Some leading figures are relatively well-known, such as Milton Friedman, the elfin libertarian who had a greater influence on American life than any other economist of his generation, and Arthur Laffer, who sketched a curve on a cocktail napkin that helped to make tax cuts a staple of conservative economic policy.
Others stayed out of the limelight, but left a lasting impact on modern life: Walter Oi, a blind economist who dictated to his wife and assistants some of the calculations that persuaded President Nixon to end military conscription; Alfred Kahn, who deregulated air travel and rejoiced in the crowded cabins on commercial flights as the proof of his success; and Thomas Schelling, who put a dollar value on human life.
Their fundamental belief? That government should stop trying to manage the economy.Their guiding principle? That markets would deliver steady growth, and ensure that all Americans shared in the benefits.
But the Economists' Hour failed to deliver on its promise of broad prosperity. And the single-minded embrace of markets has come at the expense of economic equality, the health of liberal democracy, and future generations.
Timely, engaging and expertly researched, The Economists' Hour is a reckoning -- and a call for people to rewrite the rules of the market.
A Wall Street Journal Business BestsellerWinner of the Porchlight Business Book Award in Narrative & Biography

Binyamin Appelbaum writes about economics and business for the editorial page of The New York Times. From 2010 to 2019, he was a Washington correspondent for the Times, covering economic policy in the aftermath of the 2008 crisis. He previously worked for The Charlotte Observer, where his reporting on subprime lending won a George Polk Award and was a finalist for the 2008 Pulitzer Prize.

"His book is a marvel of popular historical writing, propelled by anecdotes and just the right amount of explanation but also impressively well grounded in the latest academic research by historians, sociologists and others. Much of the territory it covers was familiar to me, but I was constantly learning new twists and nuances."—Justin Fox, The New York Times

"Lively and entertaining...The Economists' Hour is a reminder of the power of ideas to shape the course of history."—Liaquat Ahamed, The New Yorker

"It is, I will tell you - and this is not just me, a Marketplace geek, saying this - it's fascinating. It's totally, totally fascinating."—Kai Ryssdal, Marketplace

"The rise and fall of the Chicago School is chronicled by Binyamin Appelbaum in his admirable book The Economists' Hour. As he shows, economists were treated as little more than backroom statisticians until the late 1960s.... Appelbaum argues that their heyday ended on October 13 2008, when the chief executives of America's largest banks were marched into the US Treasury for a crisis meeting. He is surely correct. The mother of all Wall Street bailouts shattered the reputation economics had gained over the previous 40 years. Yet economists' hubris lingers. Perhaps it is a lagging indicator. Economists might call it "sticky".—Edward Luce, Financial Times

"The Economists' Hour provides a novel perspective on the conservative revolution that dominated the past half-century of American political history."—James Kwak, The Washington Post

"A kind of ur-text, revealing the destructive role of centering economists in shaping public policy. It's not that we don't need economists and economic theory, but The Economist's Hour patiently reveals the many times and multiple ways they've had an outsized influence at key times and have steered us wrong. It's a fascinating analysis."—John Warner, The Chicago Tribune

"The Economists' Hour is a work of journalism rather than polemic. It is a well reported and researched history of the ways in which plucky economists helped rewrite policy in America and Europe and across emerging markets."—The Economist

"Appelbaum's book shows economists' dramatic impact on government policy, and thus reveals economics to be not an abstract, disinterested science but a moral and political science all to itself. "—Robin Kaiser-Schatzlein, The New Republic

"A must-read book for our moment."—E.J. Dionne, The Washington Post

"Appelbaum's excellent book covers much history of economic policy, but at bottom it is about politics and ideology."—The American Prospect

"A marvelous ride through the evolution of free-market ideas."—Chris Johns, Irish Times

"Appelbaum, a New York Times editorialist and former economics beat reporter, writes lucidly about a number of connected subjects: the content of economics scholarship during the postwar era, the highly interpersonal and institution-specific story of how particular ideas and individuals came to have influence with those in power, and, most strikingly, how economists came to enter policymaking and insinuate themselves into the governing class-a distinction among academic disciplines. The result is a convincing historical interpretation that shows both the origins and consequences of economists' most self-serving myths... No one has told this whole story, operating over multiple economic subfields, as well as Appelbaum."—Marshall Steinbaum, The Boston Review

"My favorite parts of Appelbaum's book (which is most of it) include entertaining descriptions of the evolution of economic thought, which features lots of debate and disagreement about the right role for government."—Allison Schrager, Quartz

"Appelbaum has written not just an engaging but an important book. If you want to better understand our current malaise...this book will give you both useful perspective and an enjoyable ride along the way."—Democracy Journal

"Appelbaum's excellent book covers much history of economic policy, but at bottom it is about politics and ideology."—Prospect

"The New York Times financial writer maps the advance of economists-from the Kennedy administration onward-out of the academy and into government, elevating free markets in the sausage-making of public policy and sparking the inequity that plagues us today."—O Magazine

"A thoughtful history of the role of economists in U.S. government and public policy debates...This work offers an intelligent assessment of free-market thought in modern times and the resultant policies and should prove of interest to those interested in public policy."—Library Journal

"This thoroughly researched, comprehensive, and critical account of the economic philosophies that have reigned for the past half century powerfully indicts them."—Publisher Weekly (starred)

"Binyamin Appelbaum has written a powerful must-read for all those interested in reinvigorating the credibility of economics, especially in policymaking circles. Through an engaging discussion of how economists' influence grew and spread, he shows how free-market economics evolved into an over-promising 'affirming religion,' only to disappoint too many of its followers and lead others astray. His insightful analysis also helps us identify what's needed to ensure that the market economy remains 'one of humankinds most awesome inventions."—Mohamed A. El-Erian, author of New York Times bestsellers When Markets Collide and The Only Game in Town

"I very much enjoyed reading The Economists' Hour, an entertaining and well-written look at how market-oriented ideas rose from the academy and transformed nations. I do not agree with each and every perspective, but found this a valuable and highly recommendable book, which I devoured in a single sitting."—Tyler Cowen, author of The Great Stagnation