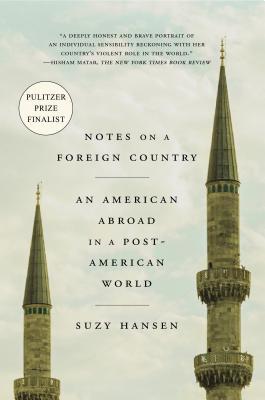 "A deeply honest and brave portrait of of an individual sensibility reckoning with her country's violent role in the world." —Hisham Matar, The New York Times Book Review

In the wake of the September 11 attacks and the U.S.-led invasion of Iraq, Suzy Hansen, who grew up in an insular conservative town in New Jersey, was enjoying early success as a journalist for a high-profile New York newspaper. Increasingly, though, the disconnect between the chaos of world events and the response at home took on pressing urgency for her. Seeking to understand the Muslim world that had been reduced to scaremongering headlines, she moved to Istanbul.

Hansen arrived in Istanbul with romantic ideas about a mythical city perched between East and West, and with a naïve sense of the Islamic world beyond. Over the course of her many years of living in Turkey and traveling in Greece, Egypt, Afghanistan, and Iran, she learned a great deal about these countries and their cultures and histories and politics. But the greatest, most unsettling surprise would be what she learned about her own country—and herself, an American abroad in the era of American decline. It would take leaving her home to discover what she came to think of as the two Americas: the country and its people, and the experience of American power around the world. She came to understand that anti-Americanism is not a violent pathology. It is, Hansen writes, “a broken heart . . . A one-hundred-year-old relationship.”

Blending memoir, journalism, and history, and deeply attuned to the voices of those she met on her travels, Notes on a Foreign Country is a moving reflection on America’s place in the world. It is a powerful journey of self-discovery and revelation—a profound reckoning with what it means to be American in a moment of grave national and global turmoil.

Suzy Hansen is contributing writer to The New York Times Magazine and has written for many other publications. In 2007, she was awarded a fellowship from the Institute of Current World Affairs to do research in Turkey. She currently lives in Istanbul. Notes on a Foreign Country is her first book.

"Deeply honest and brave . . . A sincere and intelligent act of self-questioning . . . Hansen is doing something both rare and necessary." —Hisham Matar, The New York Times Book Review (cover)

"A piercingly honest critique of the unexamined white American life." —The New Yorker

"Informed by deep reading in the history of U.S. foreign policy . . . At a time when our wrenching politics have turned our gaze on ourselves, [Hansen's] book is a necessary tonic." —Christian Lorentzen, New York Magazine

"Searching and searing . . . [Suzy Hansen] combines a brisk history of America’s anguished intervention in the region; artful reporting on how citizens in Turkey and its neighbors view the United States today; and unsparing self-reflection to explain how she, an Ivy League-educated journalist, could be so ignorant of the extent of her country’s role in remaking the post-World War II world . . . Notes on a Foreign Country is a testament to one journalist’s courage in digging deep within herself to understand the real story and to make sure she gets it right." —Barbara Spindel, The Christian Science Monitor

"[Hansen] asks probing and difficult questions that left me ruminating about their significance in our current political climate . . . An insightful read for any American who is, has been, or will be living abroad . . . Hansen’s book serves as a call to serious reflection and action for white Americans, even, and perhaps especially, the liberal, well traveled, and well intentioned." —Rebecca Barr, Los Angeles Review of Books

"Compelling . . . [Hansen] vividly captures the disorientation we experience when our preconceived notions collide with uncomfortable discoveries . . . Rare and refreshing . . . Hansen's principal injunction to Americans to understand how others view them and their country's policies is timely and urgent." —Ali Wyne, The Washington Post

"Hansen turns a coming-of-age travelogue into a geopolitical memoir of sorts, without sacrificing personal urgency in the process . . . Her long stay in Istanbul (she’s still there) gives her an outsider’s vantage on myopic American arrogance that is bracing. And her fascinating insider’s view of Recep Tayyip Erdogan’s rise upends Western simplicities . . . The experience is contagious." —Ann Hulbert, The Atlantic

"A kind of absolution and redemption for one thoughtful and sensitive US citizen . . . conducted by an insightful writer with remarkable powers of observation." —Kaya Genç, The New York Review of Books

"A fluid amalgam of memoir, journalism and political critique — and a very readable challenge to American exceptionalism." —Alice Troy-Donovan, The Financial Times

"Extraordinary . . . This is a beautiful, angry, sad piece of writing that every American should read as we try to live in a world that has long known things about us that we are only now coming to understand." —Ruth Conniff, The Progressive

"Ardent, often lovely . . . If Noam Chomsky could write like this, Hansen's work would already be done." —Karl Vick, TIME

"It would be difficult for an American reader not to feel changed by this book. By framing the history of American imperialism within her own journey from innocence to knowledge, Hansen serves as a guide to whom we all can easily relate." —Andrew Wessels, Los Angeles Review of Books

"Hansen’s sustained self-criticism indicts the white American system itself and, in the process, does the field of journalism a great service with her humility, introspection, and willingness to defy the establishment line." —Belén Fernández, Jacobin

"Crucial and powerful . . . A keen and penetrating meditation on the decline of the United States . . . Downright prophetic." —Ryne Clos, Spectrum Culture

"Sobering yet hopeful . . . Written with compassion and a deep thirst for justice, this book is a must for anyone struggling to make sense of the rapidly changing times we live in." —Jeannine M. Pitas, America

"Eloquent and impassioned . . . Hansen leaves us with the fervent hope that Americans can reconnect us to the rest of humanity." —Tom Zelman, Minneapolis Star-Tribune

"Fascinating . . . Hansen artfully conveys her own initial lack of awareness of the world, and her realization that she had internalized American exceptionalism into her own identity." —The National Book Review

“Hansen’s must-read book makes the argument that Americans, specifically white Americans, are decades overdue in examining and accepting their country’s imperial identity . . . Hansen builds her winning argument by combining personal examination and observation with geopolitical history lessons. She is a fearless patriot, and this is a book for the brave.” —Emily Dziuban, Booklist (starred review)

“Lucid, reflective, probing, and poetic, Hansen’s book is also a searing critique of the ugly depths of American ignorance, made more dangerous because the declining U.S. imperial system coincides with decay at home. The book is a revelatory indictment of American policy both domestic and foreign, made gripping by Hansen’s confident . . . distillation of complicated historical processes and her detailed, evocative descriptions of places, people, and experiences most American audiences can’t imagine.” —Publishers Weekly (starred and boxed review)

“To be an American is of itself, George Santayana once wrote, a moral condition and education. Notes on a Foreign Country embraces this fate with a unique blend of passionate honesty, coruscating insight, and tenderness. A book of extraordinary power, it achieves something very rare: it opens up new ways of thinking and feeling.” —Pankaj Mishra, author of Age of Anger

“Suzy Hansen’s Notes on a Foreign Country is an essential, compelling read of an American woman’s coming of age and her experience abroad. Hansen describes how her own narrative of the United States’ role in geopolitics began to unravel only once she stepped out of her insular life in New York and into the unfamiliar world of Istanbul. With colorful anecdotes, observations, and telling interviews, Hansen seamlessly weaves together the complex fabric of Turkish society, and with that presents a fresh look at the United States and the perceptions abroad of its foreign policy and of its people.” —Lynsey Addario, photographer and the
author of It’s What I Do

“It is rare to come across an American writer who has moved through the world—especially the Islamic world—with the acute self-awareness and thoughtfulness of Suzy Hansen. She has deftly blended memoir, reportage, and history to produce a book of great beauty and intellectual rigor. Everybody interested in America and the Middle East must read it.” —Basharat Peer, author of A Question of Order

“Notes On a Foreign Country is at once a kaleidoscopic look at modern Turkey, a meditation on American identity in an age of American decline, and a gripping intellectual bildungsroman. I’m in awe of this wise, coruscating book.” —Michelle Goldberg, author of The Goddess Pose

“It’s really quite simple: if you have any interest at all in how the non-Western world views America and Americans, you must read Suzy Hansen’s beautifully composed memoir Notes on a Foreign Country. And when America’s leaders complain—while campaigning and in office—that there is “great hatred” for the U.S. (and that they want to get to the bottom of it), it should be required reading by government officials—all the way to the Oval Office.” —Hooman Majd, author of The Ayatollah Begs to Differ