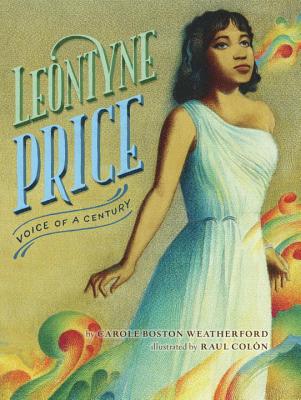 Born in a small town in Mississippi in 1927, the daughter of a midwife and a sawmill worker, Leontyne Price might have grown up singing the blues. But Leontyne had big dreams—and plenty to be thankful for—as she surrounded herself with church hymns and hallelujahs, soaked up opera arias on the radio, and watched the great Marian Anderson grace the stage.

While racism made it unlikely that a poor black girl from the South would pursue an opera career, Leontyne’s wondrous voice and unconquerable spirit prevailed. Bursting through the door Marian had cracked open, Leontyne was soon recognized and celebrated for her leading roles at the Metropolitan Opera and around the world—most notably as the majestic Ethiopian princess in Aida, the part she felt she was born to sing.

From award-winners Carole Boston Weatherford and Raul Colón comes the story of a little girl from Mississippi who became a beloved star—one whose song soared on the breath of her ancestors and paved the way for those who followed.

Carole Boston Weatherford’s picture books have received many literary accolades, including a Caldecott Honor, the Coretta Scott King Award, and an NAACP Image Award. She is also the recipient of the North Carolina Award for Literature. Carole lives in North Carolina and teaches at Fayetteville State University. To learn more about her, visit CBWeatherford.com.

Raul Colón is the illustrator of many award-winning picture books, including As Good as Anybody by Richard Michelson and Doña Flor and Tomás and the Library Lady by Pat Mora. His works have received the Pura Belpré Award, Gold and Silver Medals from the Society of Illustrators, and two Tomás Rivera Mexican American Children’s Book Awards. Raul lives in New York with his wife.

"While Weatherford addresses the barriers Price faced, her love of music and the presence of those who supported her are deeply felt."
—Publishers Weekly starred review, October 2014

"This does a beautiful job of capturing the dreams of a young girl who has the talent and willpower to make them come true, and Colón’s dappled artwork is an excellent visual accompaniment."
—Booklist starred review, November 2014