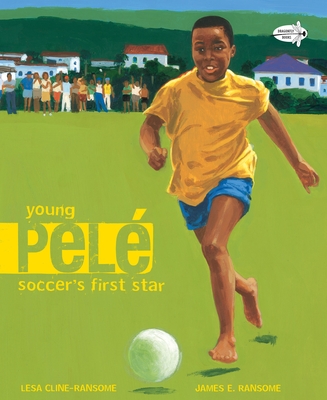 How did a poor boy named Edson—who kicked rocks down roads and dribbled balls made from rags—go on to become the greatest soccer player of all time? Here is the story of the boy who with great determination, lightning speed, and amazing skill overcame tremendous odds to become the world champion soccer star Pelé. Talented author/illustrator team Lesa Cline-Ransome and James E. Ransome bring his inspirational story vibrantly to life. The theme of this Dragonfly Book is Sports.

LESA CLINE-RANSOME is the author of numerous highly acclaimed picture book biographies, including Before There Was Mozart: The Story of Joseph Boulogne, Chevalier de Saint-George; Young Pelé: Soccer's First Star, called "stirring" in a starred review from Booklist; Satchel Paige, an ALA-ALSC Notable Children's Book about an African American baseball hero; Major Taylor: Champion Cyclist, about an African American cyclist; and Helen Keller: The World in Her Heart. Visit her at lesaclineransome.com.

JAMES E. RANSOME is the illustrator of many award-winning titles, including Young Pelé: Soccer's First Star, a finalist for the NAACP Image Awards; Satchel Paige; and Major Taylor: Champion Cyclist. He is also the illustrator of Sky Boys: How They Built the Empire State Building by Deborah Hopkinson, a Boston Globe-Horn Book Honor and an ALA-ALSC Notable Children's Book; Creation, which won a Coretta Scott King Award for Illustration; and Let My People Go by Patricia C. McKissack, winner of an NAACP Image Award. Visit him at jamesransome.com.