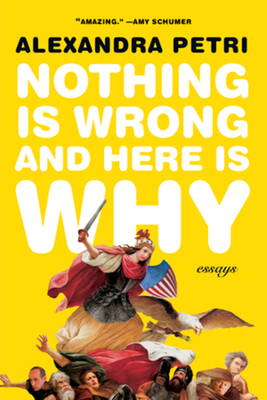 A finalist for the Thurber Prize

With new essays on the crises of 2020

In Nothing Is Wrong and Here Is Why, acclaimed Washington Post satirist Alexandra Petri offers perfectly logical, reassuring reasons for everything that has happened in recent American politics that will in no way unsettle your worldview. In essays both new and adapted from her viral columns, Petri reports that the Trump administration was as competent as it was uncorrupted, white supremacy has never been less rampant, and men have been silenced for too long. The “woman card” is a powerful card to play! Q-Anon makes perfect sense! This Panglossian venture into our swampy present offers a virtuosic first draft of history that chronicles the chaotic half-decade from the twilight of the Obama years to the final gasp of the Trump administration.

“One of the difficulties of being alive today,” Petri notes, “is that everything is absurd but fewer and fewer things are funny.” Written with devastating wit that reveals a persistent, perhaps manic optimism about her benighted country, Petri’s essays have become iconic expressions of rage and anger, read and liked and shared by hundreds of thousands of people. Nothing Is Wrong and Here Is Why shows why she has emerged as the preeminent political satirist of her generation.

Alexandra Petri is a humorist and columnist for the Washington Post and author of Nothing Is Wrong and Here Is Why, a Thurber Prize finalist. Her satire has also appeared in McSweeney’s and the New Yorker’s Daily Shouts and Murmurs. She lives in Washington, DC.

Alexandra Petri is a genius who makes the pain more bearable. I’m indebted to her always… for the mirth and for the rage.
— Rebecca Traister

Only Petri has the wit, the imagination, and the humor to fully understand the madness of the Trump era. If this is hell, she is our Virgil, except funny.
— Peter Sagal

[Alexandra Petri is a] fresh and prolific voice, someone who [is] able to make the painful reality of our current sociopolitical dumpster fire not just very, very funny, but stingingly poignant.
— Julie Klam - Washington Post

One of the funniest writers alive.
— Randall Munroe

The true stable genius of our day and age.
— Katha Pollitt