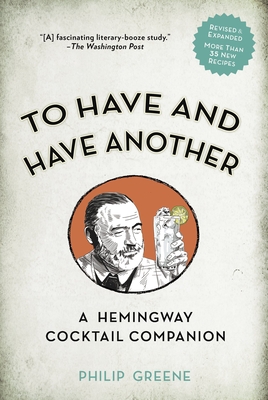 Ernest Hemingway is nearly as famous for his drinking as he is for his writing. Throughout his collected works, Papa's sensuous explorations of the delights of imbibing engaged both his characters and his readers.

In To Have and Have Another: A Hemingway Cocktail Companion, Philip Greene, cocktail historian, spirits consultant, and cofounder of the Museum of the American Cocktail, offers us a view of Papa through the lens Papa himself preferred—the bottom of a glass.

A bartender’s manual for Hemingway enthusiasts, this revised and expanded volume offers a unique take on Hemingway’s oeuvre that privileges the tastes, smells, and colors of the cocktails he enjoyed and the drinks he placed so prominently in his stories they were nearly characters themselves. To Have and Have Another delivers fascinating and lively background on the various drinks, their ingredients, their histories, and the characters—real and fictional—associated with them.

Philip Greene is one of the founders of the Museum of the American Cocktail in New Orleans. He is a sought-after speaker on topics within cocktail history, as well as a mixology consultant for restaurants and institutions across the world.

A descendant of the Peychaud family of New Orleans, Greene counts among his ancestors the illustrious Antoine Amedee Peychaud, the nineteenth-century New Orleans pharmacist who created Peychaud’s Bitters (essential to a true Sazerac) and is credited with coining the term “cocktail.”

By day, Philip serves as Trademark and Internet Counsel for the U.S. Marine Corps, stationed at the Pentagon. He lives in Washington, DC, with his wife and three daughters.

“An interesting read and a must-have for Hemingway lovers and craft bartenders.” —Kirkus Reviews

“At a time when cocktail books have become rote, To Have and Have Another by Philip Greene subverts the formula and provides recipe-by-recipe substance to Ernest Hemingway’s drinking ways . . . [Greene] lets the drinks lead the way but fleshes each one with meticulous detail to round out the pieces of Papa’s lusty life.” —San Francisco Chronicle

“A brilliant, historical account of Hemingway and his cocktail references.” —Seattle Times

“Even a casual student of the novelist Ernest Hemingway knows the man liked to drink. But a quick skimming of Philip Greene’s new book, To Have and Have Another: A Hemingway Cocktail Companion, reveals exactly how much the man enjoyed his cups.” —The New York Times

“Might be the next best thing to drinking with Hemingway.” —Imbibe

“Greene, the cofounder of the Museum of the American Cocktail, makes it easy to recreate some of Hemingway’s most memorable literary libations, including the Dripped Absinthe from For Whom the Bell Tolls and the Jack Rose from The Sun Also Rises.” —Wine Enthusiast

“[A]n off-beat and worthy addition to the Papa bookshelf, especially for the imbibers among us.”—The Florida Book Review

“To Have and Have Another is light and engaging, a fast read that works as both a dictionary of cocktails and a reference text on Hemingway’s works and personal life.”—Serious Eats