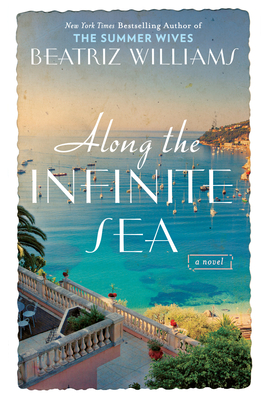 This is book number 3 in the The Schuler Sisters Novels series.

“Heroines in different decades, Annabelle and Pepper both know the peril of loving a man seemingly always just beyond their reach as well as the need to escape in order to survive. Williams' novel follows Annabelle through the hurdles life throws her way in the years preceding World War II in Europe as well as the parallel trials and tribulations of Pepper during the 1960s. These complicated women meet when Pepper sells her restored Mercedes to Annabelle as a way to raise money for her own escape plan. Together, Annabelle and Pepper come to rescue each other and learn that sometimes love can survive life's trials.”
— Dell Marie Swearer (W), Bluebird Books, Hutchinson, KS

From the New York Times bestselling author of Her Last Flight comes another riveting novel of the Schuyler sisters—where the epic story of star-crossed lovers in pre-war Europe collides with a woman on the run in the swinging '60s...

In the autumn of 1966, Pepper Schuyler's problems are in a class of their own. To find a way to take care of herself and the baby she carries—the result of an affair with a married, legendary politician—she fixes up a beautiful and rare vintage Mercedes and sells it at auction.

But the car's new owner, the glamorous Annabelle Dommerich, has her own secrets: a Nazi husband, a Jewish lover, a flight from Europe, and a love so profound it transcends decades. As the many threads of Annabelle's life before the Second World War stretch out to entangle Pepper in 1960s America, and the father of her unborn baby tracks her down to a remote town in coastal Georgia, the two women must come together to face down the shadows of their complicated pasts.

Beatriz Williams lives with her husband and children in Connecticut. She is the New York Times bestselling author of Along the Infinite Sea, Tiny Little Thing, The Secret Life of Violet Grant, A Hundred Summers, and Overseas. She also writes under the pseudonym Juliana Gray.

Praise for Along the Infinite Sea

“A world filled with elegance, charm, and bygone manners...No one does it better than Beatriz.”—Jane Green, New York Times bestselling author

“A frothy trip to a more romantic era we like to believe existed, a place filled with yacht affairs and racing Mercedes. In a world packed with traffic and Twitter, it’s a welcome retreat.”—Bustle

“With the killer charm of a Rodgers and Hammerstein score and a touch of du Maurier intrigue, Williams' latest sexy and enthralling period drama...draws readers into the parallel, luxe worlds of two sparky women in the post-Camelot 1960s.”—Kirkus Reviews (starred review)

“With spunky characters full of grace and grit...The swift pacing and emotional twists and turns of the plot will leave readers guessing up to the final pages. Recommended for readers who enjoyed the atmosphere and characters of Jess Walter’s Beautiful Ruins.”—Library Journal