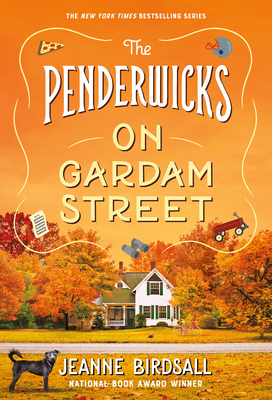 This is book number 2 in the The Penderwicks series.

This series of modern classics about the charming Penderwick family from National Book Award winner and New York Times bestseller Jeanne Birdsall is perfect for fans of Noel Streatfeild and Edward Eager. Over one million copies sold, now with a bright new look!

The Penderwick sisters are home on Gardam Street and ready for an adventure! But the adventure they get isn’t quite what they had in mind. Mr. Penderwick’s sister has decided it’s time for him to start dating—and the girls know that can only mean one thing: disaster. Enter the Save-Daddy Plan—a plot so brilliant, so bold, so funny, that only the Penderwick girls could have come up with it. It’s high jinks, big laughs, and loads of family warmth as the Penderwicks triumphantly return.

Jeanne Birdsall lives in Northampton, Massachusetts, with her husband and a large assortment of animals. The Penderwicks on Gardam Street is her second novel.

"This is a book to cherish and to hold close like a warm, cuddly blanket that you draw around yourself to keep out the cold."