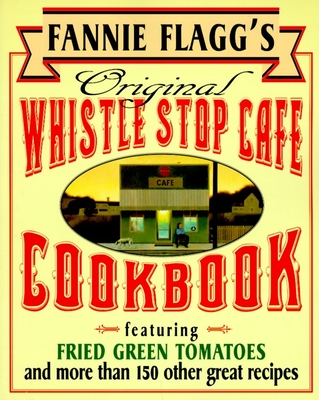 "IT'LL MAKE FOR SOME MIGHTY FINE EATING."
--Fort Worth Star Telegram
After the tremendous success of her novel, Fried Green Tomatoes at the Whistle Stop Cafe, and the beloved movie that followed, author Fannie Flagg received thousands of requests from all over the world asking for recipes from the little cafe of her Alabama childhood that was the model for the cafe in her novel. Now, she joyfully shares those recipes, in what may well be the first cookbook ever written by a satisfied customer rather than a cook! Inside you'll find wonderful recipes for:
* Skinless Fried Chicken * Pork Chops with Apples and Sweet Potatoes * Baked Ham and Pineapple Rings * Baked Turkey with Traditional Cornbread Dressing * Black-eyed Peas * Fried Okra * Creamed Onions * Broccoli Casserole * Southern Cream Gravy * Fried Catfish * Scalloped Oysters * Down Home Crab Cakes * Beaten Biscuits * Corn Pones * Lemon Ice Box Pie * Kentucky Bourbon Chocolate Pecan Pie * And much more!
The recipes in Fannie Flagg's Original Whistle Stop Cafe Cookbook are all for delicious hearty happy food that comes with all sorts of things, from gravies to hot sauces (very often the secret's in the sauce). But most of all this food, and this book, comes with love.
"If you liked her novel, Fried Green Tomatoes at the Whistle Stop Cafe, and if you liked the movie they made from that novel, you'll like this cookbook....It's funny, just like Flagg."
--Richmond Times-Dispatch
"Recommended...All the traditional dishes are here, along with the author's irreverent, irresistible commentary on Southern cooking and culture."
--Library Journal

Fannie Flagg’s career started in the fifth grade when she wrote, directed, and starred in her first play, titled The Whoopee Girls, and she has not stopped since. At age nineteen she began writing and producing television specials, and later wrote for and appeared on Candid Camera. She then went on to distinguish herself as an actress and a writer in television, films, and the theater. She is the bestselling author of Daisy Fay and the Miracle Man; Fried Green Tomatoes at the Whistle Stop Cafe; Welcome to the World, Baby Girl!; Standing in the Rainbow; A Redbird Christmas; Can’t Wait to Get to Heaven; I Still Dream About You; The All-Girl Filling Station’s Last Reunion; and The Whole Town’s Talking. Flagg’s script for the movie Fried Green Tomatoes was nominated for an Academy Award and the Writers Guild of America Award and won the highly regarded Scripter Award for best screenplay of the year. Fannie Flagg is the winner of the Harper Lee Prize. She lives happily in California and Alabama.