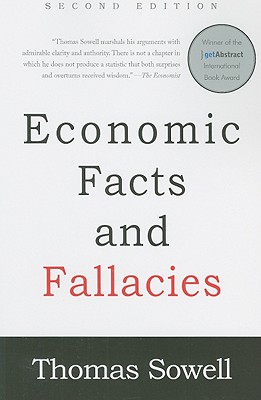 Economic Facts and Fallacies exposes some of the most popular fallacies about economic issues-and does so in a lively manner and without requiring any prior knowledge of economics by the reader. These include many beliefs widely disseminated in the media and by politicians, such as mistaken ideas about urban problems, income differences, male-female economic differences, as well as economics fallacies about academia, about race, and about Third World countries. One of the themes of Economic Facts and Fallacies is that fallacies are not simply crazy ideas but in fact have a certain plausibility that gives them their staying power-and makes careful examination of their flaws both necessary and important, as well as sometimes humorous. Written in the easy-to-follow style of the author's Basic Economics, this latest book is able to go into greater depth, with real world examples, on specific issues.

Thomas Sowell is a senior fellow at the Hoover Institution, Stanford University. He is the author of dozens of books including Charter Schools and Their Enemies, winner of the 2021 Hayek Book Prize. He is the recipient of numerous other awards, including the National Humanities Medal, presented by the President of the United States in 2003.

"Thomas Sowell marshals his arguments with admirable clarity and authority. There is not a chapter in which he does not produce a statistic that both surprises and overturns received wisdom."—The Economist

"From one of America's most noted conservative economists, a short, original book that offers some unconventional ideas about how to think about common economic topics."—Baltimore Sun

“Simply on the basis of the byline, I read everything Thomas Sowell writes.  And it keeps me busy because he writes a lot.  But I’m always richly rewarded, as I was once again when I picked up Economic Facts and Fallacies.  Sowell is fearless and invariably so far ahead of the curve in discussing economics or politics or pretty much anything that the rest of us are left with eating his intellectual dust.  I can’t think of a higher compliment than that.” —Fred Barnes, Executive Editor, The Weekly Standard and co-host of The Beltway Boys on Fox News Channel

“Economic Facts and Fallacies is the kind of book lesser lights would have labored for years to produce.  Full of pithy and useful data and imbued with the wisdom of a lifetime of economic analysis, this is another home run for the sage of Palo Alto.” —Mona Charen, Nationally syndicated columnist

"This readable volume is a useful primer exposing how economics relates to the social issues that affect our country."—Publishers Weekly

"Sowell's book dismantles many of the pervasive fallacies running rampant in politics today, broken into categories of urban life, gender, academia, income, race, and the problems of the third world. ... In Economic Facts and Fallacies, as in his other work, Sowell makes a persuasive and powerful case, armed with a solid arsenal of statistics, numbers, and historical facts."—RealClearPolitics.com

“In a new second edition, Economic Facts and Fallacies shows how misinterpretation of economics can result in flawed public policy in easily understandable terms that does not require prior knowledge of economics.”—The Galveston County Daily News

“Armed with historical facts, imperical economics, plain logic and lots of reputable statistics…Economic Facts and Fallacies contains persuasive evidence that many commonly held beliefs, especially in modern politics, simply cannot withstand the scrutiny of hard facts…Sowell successfully addresses the tough issues… An excellent read for those with a basic understanding of statistics, those who learn to distinguish fact from fallacy in this book are sure to be more perceptive members of society and more enlightened citizens and voters. And who knows? Maybe one day Economic Facts and Fallacies will open opportunities for the nations of the world.”—Deseret Morning News