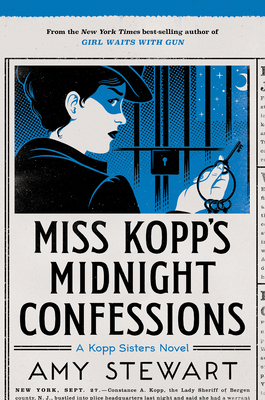 By Amy Stewart
Email or call for price
Out of Print

This is book number 3 in the A Kopp Sisters Novel series.

“Constance Kopp is back, solving mysteries and making headlines! Deputy Kopp is a heroine of her day and continues to inspire today. Whether assisting young girls in finding their footing on a law-abiding path, using her voice to stand up for the voiceless, or fighting crime alongside her all-male counterparts, Constance Kopp is breaking with traditional female roles and navigating sometimes-stormy waters with grace, dignity, and a bit of humor. What does a feminist look like? This is what a feminist looks like!”
— Donna McFadden, Wellington Square Bookshop, Exton, PA

Constance Kopp stands up to biased “morality” laws of 1916, defending the independent young women in her prison against dubious charges when no one else will.

Deputy sheriff Constance Kopp is outraged to see young women brought into the Hackensack jail over dubious charges of waywardness, incorrigibility, and moral depravity. The strong-willed, patriotic Edna Heustis, who left home to work in a munitions factory, certainly doesn’t belong behind bars. And sixteen-year-old runaway Minnie Davis, with few prospects and fewer friends, shouldn’t be publicly shamed and packed off to a state-run reformatory. But such were the laws—and morals—of 1916.

Constance uses her authority as deputy sheriff, and occasionally exceeds it, to investigate and defend these women when no one else will. But it's her sister Fleurette who puts Constance's beliefs to the test and forces her to reckon with her own ideas of how a young woman should and shouldn't behave.

Against the backdrop of World War I, and drawn once again from the true story of the Kopp sisters, Miss Kopp’s Midnight Confessions is a spirited, page-turning story that will delight fans of historical fiction and lighthearted detective fiction alike.

AMY STEWART is the New York Times best-selling author of the acclaimed Kopp Sisters series, which began with Girl Waits with Gun. Her seven nonfiction books include The Drunken Botanist and Wicked Plants. She lives in Portland, Oregon.

"Constance's ability to hold her own in male-dominated investigations and courtrooms, as well as her determination to present the facts, makes her a welcome 'vision of an entirely different kind of woman,' hopefully with more tales to come. Lively and admirable female characters emboldened by their circumstances, impeccably realized and given new life by Stewart."—Kirkus

"The cases here are based on the experiences of real women, a technique that Stewart has employed in previous volumes. Collectively, the story lines intersect to create an intriguing window into women's rights and the social mores that women challenged on the eve of World War I. VERDICT A lovely addition for series fans and aficionados of historical fiction."—Library Journal