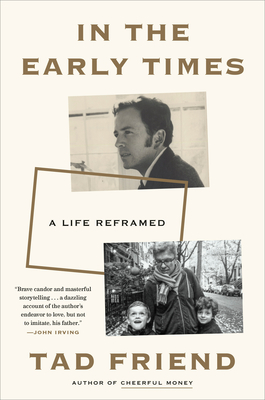 In this “dazzling” (John Irving) memoir, acclaimed New Yorker staff writer Tad Friend reflects on the pressures of middle age, exploring his relationship with his dying father as he raises two children of his own.

“How often does a memoir build to a stomach-churning, I-can’t-breathe climax in its final pages? . . . Brilliant, intensely moving.”—William Finnegan, Pulitzer Prize–winning author of Barbarian Days

ONE OF THE BEST BOOKS OF THE YEAR: The New Yorker

Almost everyone yearns to know their parents more thoroughly before they die, to solve some of those lifelong mysteries. Maybe, just maybe, those answers will help you live your own life. But life doesn’t stop to wait. In his fifties, New Yorker writer Tad Friend is grappling with being a husband and a father as he tries to grasp who he is as a son. Torn between two families, he careens between two stages in life. On some days he feels vigorous, on the brink of greatness when he plays tournament squash. On others, he feels distinctly weary, troubled by his distance from millennial sensibilities or by his own face in the mirror, by a grimace that’s so like his father’s.

His father, an erudite historian and the former president of Swarthmore College, has long been gregarious and charming with strangers yet cerebral with his children. Tad writes that “trying to reach him always felt like ice fishing.” Yet now Tad’s father, known to his family as Day, seems concerned chiefly with the flavor of ice cream in his bowl and, when pushed, interested only in reconsidering his view of Franklin Roosevelt.

Then Tad finds his father’s journal, a trove of passionate confessions that reveals a man entirely different from the exasperatingly logical father Day was so determined to be. It turns out that Tad has been self-destructing in the same way Day has—a secret each has kept from everyone, even themselves. These discoveries make Tad reconsider his own role, as a father, as a husband, and as a son. But is it too late for both of them?

Witty, searching, and profound, In the Early Times is an enduring meditation on the shifting tides of memory and the unsteady pillars on which every family rests.

Tad Friend is a longtime staff writer for The New Yorker. His memoir, Cheerful Money: Me, My Family, and the Last Days of Wasp Splendor, was chosen as one of the year’s best books by The Washington Post, Chicago Tribune, San Francisco Chronicle, and NPR. He lives in Brooklyn with his wife—Amanda Hesser, the founder of Food52—and their twins, Walker and Addison.

“Brave candor and masterful storytelling give this memoir the crafted architecture of a precisely plotted novel. Tad Friend portrays his father’s contradictory life concurrently with his own developing story—a dazzling account of the author’s endeavor to love, but not to imitate, his father.”—John Irving

“How often does a memoir build to a stomach-churning, I-can’t-breathe climax in its final pages? Virtually never. But the structure of In the Early Times has a hard twist at its center. Tad Friend does a courageous deep dive on his father, on his own upbringing, and on his family, full of deft and rueful detail. But Friend’s father is a complex, heavily defended character who slowly becomes terrifyingly familiar. For the son, the floor falls away. You see it coming, but there’s nowhere to hide. This is a brilliant, intensely moving work.”—William Finnegan, Pulitzer Prize–winning author of Barbarian Days

“In the Early Times, both a memoir about inherited defenses and a moving intercession to break those defenses down, carries the raw gleam of an intimate confession and the formidable precision of a diagnostic image. Tad Friend’s writing is funny, lustrous, tuned tight, as he excavates great wells of hope and disappointment; this book is spiked with irony and self-indictment, and warmed by Friend’s will to love and see and repair.”—Jia Tolentino, New York Times bestselling author of Trick Mirror

“A good memoir holds your attention. A great memoir grabs it by the collar, spins it around a few times, then sets it down in a completely different spot. In working through the volcanic revelations of his father’s journals, his own past, and some gristly midlife upheavals, Tad Friend has crafted a great memoir. In the Early Times is brave, perceptive, moving, and, above all, superbly written.”—Mary Roach, New York Times bestselling author of Fuzz

“In this exquisitely written and extraordinary memoir, Tad Friend sets out to unravel a family mystery, only to find himself immersed in much deeper ones, grappling with the lies we tell one another and ourselves, with the meaning of being a father and a son and a husband, and with the very nature of love and loss. The resulting book is both beautiful and unforgettable.”—David Grann, New York Times bestselling author of Killers of the Flower Moon

“A luminous narrative of love, transgression, and forgiveness, and of the ties that bind despite chafing.”—Publishers Weekly