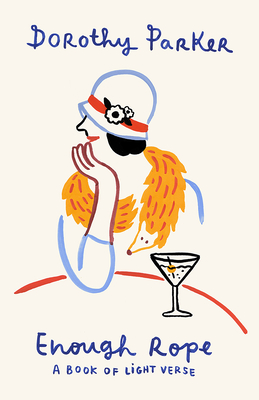 Now available as a stand-alone edition, the famous humorist’s debut collection—a runaway bestseller in 1926—ranges from lighthearted self-deprecation to acid-tongued satire, all the while gleefully puncturing sentimental clichés about relations between men and women.

Known as the wittiest woman in America and a founder of the fabled Algonquin Round Table, Dorothy Parker was also one of the Jazz Age’s most beloved poets. Her verbal dexterity and cynical humor were on full display in the many poems she published in Vanity Fair, The New Yorker, and Life and collected in her first book in 1926. The poems in Enough Rope range from lighthearted self-deprecation to acid-tongued satire, all the while gleefully puncturing sentimental clichés about the relations between men and women.

Unfortunate Coincidence
By the time you swear you’re his,
Shivering and sighing,
And he vows his passion is
Infinite, undying—
Lady, make a note of this:
One of you is lying.

DOROTHY PARKER (1893–1967) was born in New Jersey and grew up in New York. In 1916 she sold some poems to Vogue and was given a job at the magazine writing captions for fashion photographs and drawings. Parker went on to become a drama critic at Vanity Fair and the central figure of the celebrated Algonquin Round Table. Famous for her spoken wit, she showed the same satiric gift in her book reviews for The New Yorker and Esquire and in her celebrated poems and stories.

"Caked with a salty humor, rough with splinters of disillusion, and tarred with a bright black authenticity.” —The Nation