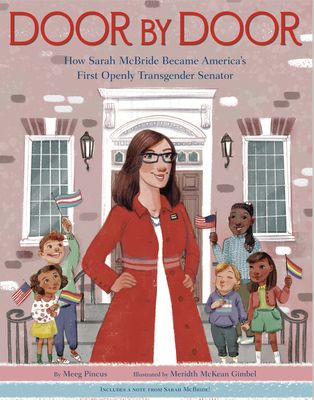 A nonfiction picture book about Delaware State Senator Sarah McBride, who dreamed of making a difference as a kid and grew up to become the highest-ranking openly transgender political official in America.

As a kid, Sarah McBride dreamed of running for office so she could help people in her community. When her friends asked for bicycles for Christmas, Sarah asked for a podium. Her friends and family encouraged her to follow this path, but there was one problem: they saw Sarah as a boy, and Sarah knew she was a girl. Every night, she’d replay the day in her head, watching how it would have played out if she was able to live as the girl she knew herself to be.

In college, she finally came out as Sarah, and in 2020 she won her election to become a Delaware State Senator, making her the highest-ranking trans political official in the country and a hero to kids everywhere who want to live their dreams and be themselves!

Meeg is the author of several nonfiction picture books, including Miep and the Most Famous Diary: The Woman Who Rescued Anne Frank’s Diary (2019), which received starred reviews from Kirkus and School Library Journal, and Winged Wonders: Solving the Monarch Migration Mystery (2020) from Sleeping Bear Press. Her books have won a variety of awards and been named to many state reading lists. Find out more at MeegPincus.com.

Meridth McKean Gimbel is an illustrator, author, and world-champion taco cruncher whose work has received many awards, including the National SCBWI-LA Mentorship Award. They are passionate about creating books that are like a snuggly blanket, an open window, and a very accessible door. Meridth is also passionate about donuts, corgis, and ghost stories. Learn more at meridthsayshello.com.