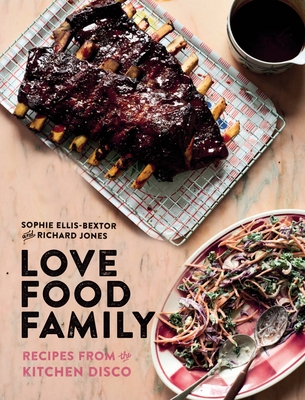 In Love Food Family, Sophie Ellis-Bextor & Richard Jones show us that the kitchen is the heart of the home and adds some glitter to family cooking

As parents to five boys, and with a strong passion for food, Sophie and Richard are no stranger to finding realistic, tasty meals that everyone wants to eat. As a result, in this cookbook you’ll find comforting roasts and stews; speedy pasta sauces and spicy ‘add ins’; hits for kids such as ‘Perfect Veggie Risotto For All’, ‘Build-Your-Own Sushi Tacos’ and ‘You-Should-Be-in-Bed Toast’; plus all the elements for a taste-packed Mexican Feast. Not forgetting, of course, Kitchen Disco cocktails to wash it all down with. The meals included in this book are also perfect for all ages, so no need to spend extra time cooking up separate dishes.

Inspired by international cuisines and fond family memories, Love Food Family is packed with accessible, flexible, crowd-pleasing feasts for eating together and proves that everything tastes better with a little bit of disco.

Sophie Ellis-Bextor shot to fame as a vocalist on Spiller's huge number one single, 'Groovejet' and with her worldwide smash hit, 'Murder on the Dancefloor'.

Her debut solo album, 'Read My Lips', was released in 2001 and sold more than 2 million copies worldwide. Her subsequent album releases include 'Shoot from the Hip' (2003), 'Trip the Light Fantastic' (2007) and 'Make a Scene' (2011). In 2014, Sophie released her album 'Wanderlust' on her own label EBGB's, which was co-written and produced by Ed Harcourt. It was a critical and commercial success spending 3 weeks in the UK top 10 and selling over 100,000 copies. Sophie followed this with 2016's 'Familia'. In 2019 Sophie released orchestrated versions of all her hits with her orchestral greatest hits album 'The Song Diaries'.

In 2020 and 2021 her Kitchen Discos, performed at home during lockdown with her five sons and recorded by her husband, musician Richard Jones, were watched and enjoyed by millions around the world. Following the performances, she released 'Songs from The Kitchen Disco', bringing together Sophie's hits with many other songs from her phenomenally successful lockdown Kitchen Disco performances, garnering further critical acclaim and another top 10 UK album chart position.

Alongside music, Sophie also released her first book in 2021 which was an autobiography called Spinning Plates. Her podcast of the same name is now in its 6th series and focuses on conversations with working women who happen to be mothers.

Richard Jones Richard Jones is a music producer, songwriter and bassist from Forest Row in Sussex. Richard is a founding member of the critically acclaimed British soft rock band 'The Feeling'. Their debut single 'Fill My Little World' (2005) was nominated for a BRIT Award, and the group's first full release single 'Sewn' (2006) placed 7th on the UK Singles Chart. Their debut album 'Twelve Stops and Home' came out in 2006, and their second album
'Join with Us' (2008) achieved number one in the UK Charts. These were followed by: 'Together We Were Made' (2011), 'Boy Who Cried Wolf' (2013), and a self-titled album in 2016. Richard and his bandmates won 'Songwriters of the Year' in 2007 at the Ivor Novello Awards and 'Band of the Year' in 2008 at the Elle Style Awards. Richard also performed at the closing ceremony of the 2012 Olympic Games, and has used his music to fundraise for charities such as the Teenage Cancer Trust and the Starlight Children's Foundation.

In addition to his accomplishments with 'The Feeling', Richard has performed with many other artists including Rufus Wainwright, Chrissie Hynde, Bryan Adams, Ed Sheeran, Nick Mason, Roger Daltrey and Ed Harcourt and has also played bass guitar on all of pop star Sophie Ellis-Bextor's studio albums, touring frequently with her band.

In 2020 and 2021, Richard and Sophie entertained millions from home with their weekly 'Kitchen Disco' Instagram live concerts, featuring their five children which was filmed and produced by Richard who often appeared wearing animal masks.