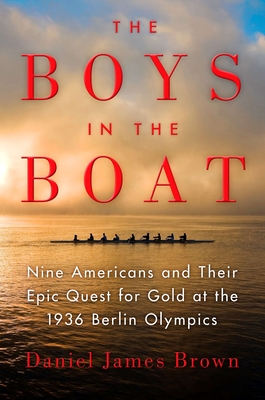 “n the early 1930's, nine young University of Washington students are part of the rowing crew striving to achieve the final pick to become the team to represent the USA at the 1936 Olympic Games in Berlin as Hitler brazenly builds his Third Reich. Fiercely determined by the hard times of the Great Depression, this is an emotional story of the crew and those who put their trust in them as they put their hearts into 'sculpting”
— Carol Hicks, Bookshelf At Hooligan Rocks, Truckee, CA

The #1 New York Times–bestselling story about the American Olympic rowing triumph  in Nazi Germany—from the author of Facing the Mountain.

Soon to be a major motion picture directed by George Clooney

For readers of Unbroken, out of the depths of the Depression comes an irresistible story about beating the odds and finding hope in the most desperate of times—the improbable, intimate account of how nine working-class boys from the American West showed the world at the 1936 Olympics in Berlin what true grit really meant.

It was an unlikely quest from the start. With a team composed of the sons of loggers, shipyard workers, and farmers, the University of Washington’s eight-oar crew team was never expected to defeat the elite teams of the East Coast and Great Britain, yet they did, going on to shock the world by defeating the German team rowing for Adolf Hitler. The emotional heart of the tale lies with Joe Rantz, a teenager without family or prospects, who rows not only to regain his shattered self-regard but also to find a real place for himself in the world. Drawing on the boys’ own journals and vivid memories of a once-in-a-lifetime shared dream, Brown has created an unforgettable portrait of an era, a celebration of a remarkable achievement, and a chronicle of one extraordinary young man’s personal quest.

Daniel James Brown is the #1 New York Times bestselling author of The Boys in the Boat, The Indifferent Stars Above, and Under a Flaming Sky. He has taught writing at San Jose State University and Stanford University. He lives outside Seattle.

"A triumph of great writing matched with a magnificent story. Daniel James Brown strokes the keyboard like a master oarsman, blending power and grace to propel readers toward a heart-pounding finish. In Joe Rantz and his crewmates, Brown has rediscovered true American heroes who remind us that pulling together is the surest path to glory.”
- Mitchell Zuckoff, author of Lost in Shangri-La and Frozen in Time

“In 1936 nine working-class American boys burst from their small towns into the international limelight, unexpectedly wiping the smile off Adolph Hitler’s face by beating his vaunted German team to capture the Olympic gold medal.  Daniel James Brown has written a robust, emotional snapshot of an era, a book you will recommend to your best friends.
--James Bradley, author of Flags of our Fathers and Flyboys

“I really can't rave enough about this book.  Daniel James Brown has not only captured the hearts and souls of the University of Washington rowers who raced in the 1936 Olympics, he has conjured up an era of history.  Brown's evocation of Seattle in the Depression years is dazzling, his limning of character, especially the hardscrabble hero Joe Rantz, is novelistic, his narration of the boat races and the sinister-exalted atmosphere of Berlin in 1936 is cinematic. I read the last fifty pages with white knuckles, and the last twenty-five with tears in my eyes. History, sports, human interest, weather, suspense, design, physics, oppression and inspiration -- The Boats in the Boat has it all and Brown does full justice to his terrific material.  This is Chariots of Fire with oars.”
--David Laskin, author of The Children's Blizzard  and  The Long Way Home

“A lovingly crafted saga of sweat and idealism that raised goosebumps from the first page. I was enthralled by the story's play of light and shadow, of mortality and immortality, and its multidimensional recreation of the pursuit of excellence. This meditation on human frailty and possibility sneaks up on you until it rushes past with the speed of an eight-oared boat."
--Laurence Bergreen, author of Columbus and Over the Edge of the World

“The Boys in the Boat is an exciting blend of history and Olympic sport. I was drawn in as much by the personal stories as I was by the Olympic glory. A must read for anyone looking to be inspired!"
--Luke McGee, USA Rowing Men’s National Team Coach


“The Boys in the Boat is not only a great and inspiring true story; it is a fascinating work of history."
--Nathaniel Philbrick, author of Mayflower and In the Heart of the Sea

“A lovingly crafted saga of sweat and idealism that raised goosebumps from the first page. I was enthralled by the story's play of light and shadow, of mortality and immortality, and its multidimensional recreation of the pursuit of excellence. This meditation on human frailty and possibility sneaks up on you until it rushes past with the speed of an eight-oared boat."
-  Laurence Bergreen, author of Columbus and Over the Edge of the World

“For years I’ve stared and wondered about the old wooden boat resting on the top rack of the UW boathouse. I knew the names of the men that rowed it but never really knew who they were. After reading this book, I feel like I got to relive their journey and witness what it was truly like earning a seat in that Pocock shell. The passion and determination showed by Joe and the rest of the boys in the boat are what every rower aspires to. I will never look at that wooden boat the same again.”
- Mary Whipple, Olympic gold medal–winning coxswain, women’s eight-oared crew, 2008 and 2012


"A remarkable book...hard to put down."
— The Seattle Times


Praise for The Indifferent Stars Above
(A New York Times Editors's Pick; An IndieNext Notable Pick; A B&N Best of the Year selection; finalist for the Washington State Book Award)

"An ideal pairing of talent and material."
— Mary Roach, The New York Times


“A compelling read…capturing the stories of heroism and loss with imagination and attention-grabbing skill.”
— The Minneapolis Star-Tribune