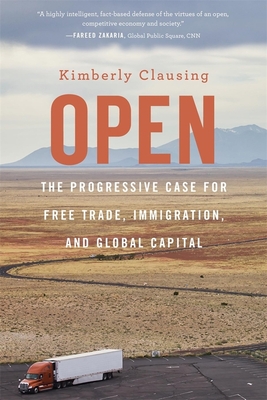 "A highly intelligent, fact-based defense of the virtues of an open, competitive economy and society."
--Fareed Zakaria "A vitally important corrective to the current populist moment...Open points the way to a kinder, gentler version of globalization that ensures that the gains are shared by all."
--Justin Wolfers "Clausing's important book lays out the economics of globalization and, more important, shows how globalization can be made to work for the vast majority of Americans. I hope the next President of the United States takes its lessons on board."
--Lawrence H. Summers, former Secretary of the Treasury "Makes a strong case in favor of foreign trade in goods and services, the cross-border movement of capital, and immigration. This valuable book amounts to a primer on globalization."
--Richard N. Cooper, Foreign Affairs Critics on the Left have long attacked open markets and free trade agreements for exploiting the poor and undermining labor, while those on the Right complain that they unjustly penalize workers back home. Kimberly Clausing takes on old and new skeptics in her compelling case that open economies are actually a force for good. Turning to the data to separate substance from spin, she shows how international trade makes countries richer, raises living standards, benefits consumers, and brings nations together. At a time when borders are closing and the safety of global supply chains is being thrown into question, she outlines a clear agenda to manage globalization more effectively, presenting strategies to equip workers for a modern economy and establish a better partnership between labor and the business community.