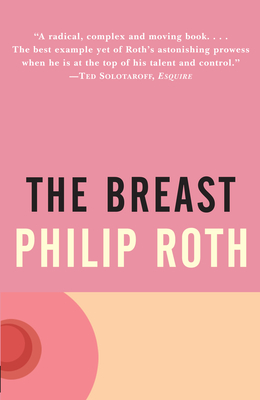 By Philip Roth
Email or call for price
Special Order. May not be available. Call the store for details.

Like a latter-day Gregor Samsa, Professor David Kepesh wakes up one morning to find that he has been transformed. But where Kafka's protagonist turned into a giant beetle, the narrator of Philip Roth's richly conceived fantasy has become a 155-pound female breast. What follows is a deliriously funny yet touching exploration of the full implications of Kepesh's metamorphosis—a daring, heretical book that brings us face to face with the intrinsic strangeness of sex and subjectivity.

In 1997 Philip Roth won the Pulitzer Prize for American Pastoral. In 1998 he received the National Medal of Arts at the White House and in 2002 the highest award of the American Academy of Arts and Letters, the Gold Medal in Fiction. He twice won the National Book Award and the National Book Critics Circle Award. He won the PEN/Faulkner Award three times. In 2005 The Plot Against America received the Society of American Historians’ Prize for “the outstanding historical novel on an American theme for 2003–2004.” Roth received PEN’s two most prestigious awards: in 2006 the PEN/Nabokov Award and in 2007 the PEN/Bellow Award for achievement in American fiction. In 2011 he received the National Humanities Medal at the White House, and was later named the fourth recipient of the Man Booker International Prize. He died in 2018.

"A radical, complex, and moving book...the best example yet of Roth's astonishing prowess when he is at the top of his talent and control." —Ted Solotaroff, Esquire

"A new shock world of sensual possibility.... Need one say again that Roth is an admirable novelist who never steps twice into the same river?" —Anthony Burgess

"The Breast is terrific...inventive and sane and very funny. The trick which is the heart of the book is brilliant...and rich with meaning." —John Gardner, The New York TImes Book Review

"Hilarious, serious, visionary, logical, sexual-philosophical; the ending amazes—the joke takes three steps beyond savagery and satire and turns into a sublimeness of pity. One knows when one is reading something that will permanently enter the culture." —Cynthia Ozick