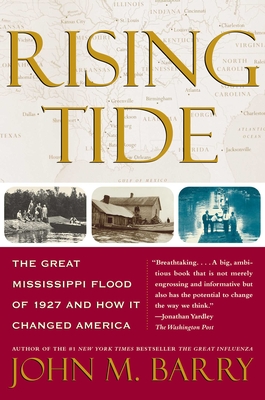 A New York Times Notable Book of the Year, winner of the Southern Book Critics Circle Award and the Lillian Smith Award.

The flood brought with it a human storm: white and black collided, honor and money collided, regional and national powers collided. New Orleans’s elite used their power to divert the flood to those without political connections, power, or wealth, while causing Black sharecroppers to abandon their land to flee up north. The states were unprepared for this disaster and failed to support the Black community. The racial divides only widened when a white officer killed a Black man for refusing to return to work on levee repairs after a sleepless night of work.

In the powerful prose of Rising Tide, John M. Barry removes any remaining veil that there had been equality in the South. This flood not only left millions of people ruined, but further emphasized the racial inequality that have continued even to this day.

John M. Barry is the author of Rising Tide, The Ambition and the Power: A True Story of Washington, and co-author of The Transformed Cell, which has been published in twelve languages. As Washington editor of Dunn's Review, he covered national politics, and he has also written for The New York Times Magazine, Esquire, Newsweek, The Washington Post, and Sports Illustrated. He lives in New Orleans and Washington, D.C.

Tom Wicker This is the kind of history I love -- the brilliantly told story of the great Mississippi flood of 1927, a disaster for millions but the making of a future president and a turning point for the nation.

T.H. Watkins The New York Times Book Review Extraordinary...Rising Tide stands not only as a powerful story of disaster but as an accomplished and important social history, magisterial in its scope and fiercely dedicated to unearthing truth.