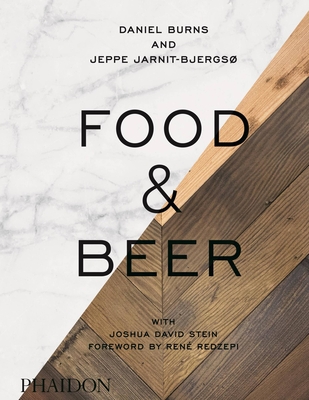 A book with more than 54 recipes from an internationally acclaimed chef/brewer duo dedicated to elevating and pairing beer with high-end dining.

The debut book by Danish gypsy brewer Jeppe Jarnit-Bjergsø of the bar Tørst, and Canadian chef Daniel Burns of the Michelin-starred restaurant Luksus—both in a shared space in Greenpoint, Brooklyn where they elevate beer to the level of wine in fine dining.

With a dialogue running throughout the book, Food & Beer examines the vision and philosophy of this duo at the forefront of a new gastronomic movement. With a stunning, bold aesthetic, the design will highlight the dual visions of the authors and the spaces—Tørst, which is more rustic and relaxed, and Luksus, which is more sleek and refined.

Daniel Burns is the chef behind the Michelin-starred beer-pairing restaurant Luksus in Greenpoint, Brooklyn. He has been a chef at Heston Blumenthal's Fat Duck in the UK, pastry chef at René Redzepi's Noma, and he ran the Momofuko test kitchen for David Chang in New York. He is from Nova Scotia, Canada and lives in Brooklyn.

Jeppe Jarnit-Bjergsø is the gypsy brewer behind Evil Twin Brewing and the beer bar at Tørst in Greenpoint, Brooklyn. Formerly the beer director at Noma, he is from Denmark and lives in Brooklyn with his family.

Joshua David Stein's writing has appeared in many publications. He is the food critic at New York Observer, a food and film columnist at Eater, and host at Heritage Radio Network. He lives in New York.

"Pairing the right beer with a beautiful meal has never looked as good as it does in [this] new tasteful tome... Even just the photos of [the] dishes... are good enough to make your mouth water." —National Enquirer

"Frank and charming prose weaves together personal stories and expert insights; it?s a meeting of minds in the unexpected friendship of beer and fine dining." —NUVO Magazine

"This is a coffee table book for those serious about beer, the craft of a unique plate or just gorgeous photography. Seriously. Gorgeous." —Brew Drink Run

"A must-buy and a must-read for all interested in food, beer and the changing scope of the restaurant trade" —InGoodTasteUK.com

"A hunger-inducing tome... the kinds of dishes that can induce page-eating if you don't keep your wits about you." —UrbanDaddy

"When it comes to pairings, Jarnit-Bjergso and Burns are amongst the best." —Wallpaper

"Coupled with stellar photography, this is a book for sophisticated beer lovers or anyone interested in this new gastronomic trend." —Tastebook

"The beauty of this book (and it is truly a stunner) is the ease with which both Burns and Jarnit-Bjerso can talk about food and beer-and how they can embolden one another-interchangeably." 8212;PUNCH

"The chance meeting of two remarkable individuals. One of the best brewers in a generation of greats, with a good sense of business and fresh attitude, and the other a creative, driven chef with crazy food work ethics. But it also signified the start of a new style of restaurant, a place in which light, creative cooking, Michelin-star-worthy stuff, was at home with beer. I'm pretty sure that individually both would've succeeded in their own right-Jeppe creating great brews, and Daniel with a Michelin star or two doing something else-but together I believe they've created something truly special. Something new." —René Redzepi (from his foreword)

"Daniel Burns' instinct is to dissect and analyze the way things work. He's interested in what makes something tick and his partnership with Jeppe Jarnit-Bjergso produces delicious and unexpected results. Daniel and Jeppe are giving us a book that feels new and adventurous, while still painstakingly thought out. There is a method to the madness." —David Chang

"Food & Beer is full of Daniel's boundless inquisitive energy. All the focus that we came to expect of him while at The Fat Duck has been applied to this book, taking the subject to a new level." —Heston Blumenthal