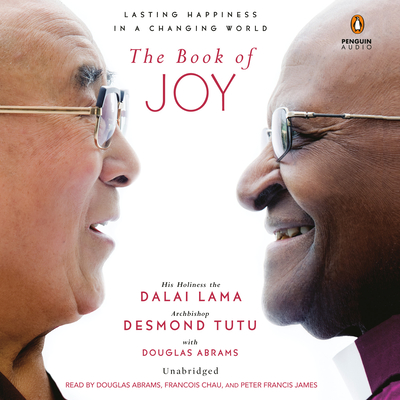 Two great spiritual masters share their own hard-won wisdom about living with joy even in the face of adversity.

The occasion was a big birthday. And it inspired two close friends to get together in Dharamsala for a talk about something very important to them. The friends were His Holiness the Dalai Lama and Archbishop Desmond Tutu. The subject was joy. Both winners of the Nobel Prize, both great spiritual masters and moral leaders of our time, they are also known for being among the most infectiously happy people on the planet.

From the beginning the book was envisioned as a three-layer birthday cake: their own stories and teachings about joy, the most recent findings in the science of deep happiness, and the daily practices that anchor their own emotional and spiritual lives. Both the Dalai Lama and Archbishop Tutu have been tested by great personal and national adversity, and here they share their personal stories of struggle and renewal. Now that they are both in their eighties, they especially want to spread the core message that to have joy yourself, you must bring joy to others.

Most of all, during that landmark week in Dharamsala, they demonstrated by their own exuberance, compassion, and humor how joy can be transformed from a fleeting emotion into an enduring way of life.

His Holiness the 14th Dalai Lama, Tenzin Gyatso, describes himself as a simple Buddhist monk. He is the spiritual leader of the Tibetan People and of Tibetan Buddhism. He was awarded the Nobel Peace Prize in 1989 and the US Congressional Gold Medal in 2007. Born in 1935 to a poor farming family in northeastern Tibet he was recognized at the age of two as the reincarnation of his predecessor, the 13th Dalai Lama. He has been a passionate advocate for a secular universal approach to cultivating fundamental human values. For over three decades the Dalai Lama has maintained an ongoing conversation and collaboration with scientists from a wide range of disciplines, especially through the Mind and Life Institute, an organization that he co-founded. The Dalai Lama travels extensively, promoting kindness and compassion, interfaith understanding, respect for the environment, and, above all, world peace. He lives in exile in Dharamsala, India. For more information, please visit www.dalailama.com.

Desmond Mpilo Tutu, Archbishop Emeritus of Southern Africa, became a prominent leader in the crusade for justice and racial reconciliation in South Africa. He was awarded the Nobel Peace Prize in 1984 and the Presidential Medal of Freedom in 2009. In 1994, Tutu was appointed chair of South Africa’s Truth and Reconciliation Commission by Nelson Mandela, where he pioneered a new way for countries to move forward after experiencing civil conflict and oppression. He was the founding chair of The Elders, a group of global leaders working together for peace and human rights. Archbishop Tutu is regarded as a leading moral voice and an icon of hope. Throughout his life, he has cared deeply about the needs of people around the world, teaching love and compassion for all. For more information please visit tutu.org.za.

Douglas Abrams is an author, editor, and literary agent. He is the founder and president of Idea Architects, a creative book and media agency helping visionaries to create a wiser, healthier, and more just world. Doug has worked with Desmond Tutu as his cowriter and editor for over a decade, and before founding his own literary agency, he was a senior editor at HarperCollins and also served for nine years as the religion editor at the University of California Press. He believes strongly in the power of books and media to catalyze the next stage of global evolutionary culture. He lives in Santa Cruz, California. For more information, please visit ideaarchitects.com and humanjourney.com.

“The question may be timeless, but their answer has urgent significance.”
—Time Magazine

"[An] exquisite book...An intimate glimpse into the minds of two of the world's spiritual guides, and their foundation for an attainable and practical approach to experiencing a more enriching and sustainable life of abundant joy."
—Shelf Awareness

"This sparkling, wise, and immediately useful gift to readers from two remarkable spiritual masters offers hope that joy is possible for everyone even in the most difficult circumstances, and describes a clear path for attaining it."
—Publishers Weekly

"The world needs joy and compassion more than ever before – and who better than Archbishop Tutu and the Dalai Lama to show us how it is done. This beautiful book takes us on the journey of their friendship and gives us the gift of their wisdom. A bright spot of hope and love in this world."
—Sir Richard Branson

"It's a book that transports you deep within the intimate friendship that binds these two incredible souls. And it’s a book that vividly probes the very nature of joy itself — the illusions that eclipse it, the obstacles that obscure it, the practices that cultivate it, and the pillars that sustain it."
—Rich Roll, The Rich Roll Podcast