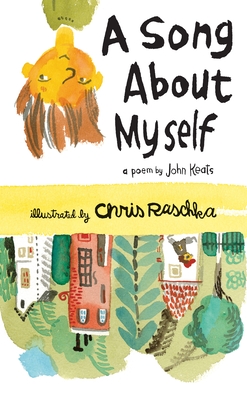 He was a naughty boy,
A naughty boy was he,
He would not stop at home,
He could not quiet be.

English poet John Keats is remembered for his great odes and sonnets — making this lighthearted, little-known poem a special treat. As written in a letter to his young sister when he was feeling homesick on a visit to Scotland, Keats runs his rhymes up and down and all around, leading the reader on a playful chase in and out of language and meaning while caricaturing both himself and what it means to be an aspiring poet. In perfect synchrony, the celebrated Chris Raschka illustrates Keats’s droll words with his signature vibrant, energetic watercolors.

John Keats was born in London on October 31, 1795. While he trained in medicine and was a licensed apothecary, he never practiced. Instead, he devoted his life to poetry, and his own poetic work is striking in its vivid imagery and use of classical mythology. He died of tuberculosis in 1821.

Chris Raschka is a two-time Caldecott Medal winner, for A Ball for Daisy and The Hello, Goodbye Window, written by Norman Juster. He is also the creator of The Cosmobiography of Sun Ra and illustrated four acclaimed poetry anthologies edited by Paul B. Janeczko. Chris Raschka lives in New York City.

Raschka injects fresh whimsy into a bit of linguistic tomfoolery from one of the poet's letters to his younger sister...Visually boisterous, great fun to read aloud, and likely to incite some "wond'ring" along with the laughter.
—Kirkus Reviews (starred review)

Raschka fittingly dedicates this edition to his own sister, and his endpapers make connections across time and space, too: a collapsed map imagines the islands of New York City abutting those of Scotland. It’s an enchanting and intimate glimpse of the distant, anthologized Keats as a conversational letter writer who once “stood in his shoes/ And... wonder’d” at his world.
—Publishers Weekly (starred review)

Raschka’s free-flowing watercolors pick up the nursery-rhyme folksiness in the lines and also have a touch of Keats’ near-contemporary Edward Lear in their joyful absurdity. If you’re looking to cunningly thread some canonical poetry into a collection or seeking to springboard a comparison between verse then and now, this will fill the bill.
—Bulletin of the Center for Children's Books

Students can write their own playful poems about themselves, rhyming or not, after reading this delightful picture book. A lovely introduction to this romantic poet that will please readers of any age.
—School Library Journal