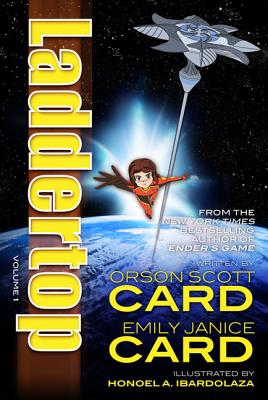 This is book number 1 in the Laddertop series.

Twenty-five years ago, the alien Givers came to Earth. They gave the human race the greatest technology ever seen— four giant towers known as Ladders that rise 36,000 miles into space and culminate in space stations that power the entire planet. Then, for reasons unknown, the Givers disappeared. Due to the unique alien construction of the Laddertop space stations, only a skilled crew of children can perform the maintenance necessary to keep the stations up and running.

Back on Earth, competition is fierce to enter Laddertop Academy. It is an honor few students will achieve. Robbi and Azure, two eleven-year-old girls who are the best of friends, are candidates for the Academy. They will become entangled in a dangerous mystery that may help them solve the riddle of the Givers...if it doesn't destroy the Earth first!

Orson Scott Card is best known for his science fiction novel Ender's Game and its many sequels that expand the Ender Universe into the far future and the near past. Those books are organized into the Ender Saga, which chronicles the life of Ender Wiggin; the Shadow Series, which follows on the novel Ender's Shadow and is set on Earth; and the Formic Wars series, written with co-author Aaron Johnston, which tells of the terrible first contact between humans and the alien "Buggers." Card has been a working writer since the 1970s. Beginning with dozens of plays and musical comedies produced in the 1960s and 70s, Card's first published fiction appeared in 1977--the short story "Gert Fram" in the July issue of The Ensign, and the novelette version of "Ender's Game" in the August issue of Analog. The novel-length version of Ender's Game, published in 1984 and continuously in print since then, became the basis of the 2013 film, starring Asa Butterfield, Harrison Ford, Ben Kingsley, Hailee Steinfeld, Viola Davis, and Abigail Breslin.

Card was born in Washington state, and grew up in California, Arizona, and Utah. He served a mission for the LDS Church in Brazil in the early 1970s. Besides his writing, he runs occasional writers' workshops and directs plays. He frequently teaches writing and literature courses at Southern Virginia University.

He is the author many science fiction and fantasy novels, including the American frontier fantasy series "The Tales of Alvin Maker" (beginning with Seventh Son), and stand-alone novels like Pastwatch and Hart's Hope. He has collaborated with his daughter Emily Card on a manga series, Laddertop. He has also written contemporary thrillers like Empire and historical novels like the monumental Saints and the religious novels Sarah and Rachel and Leah. Card's work also includes the Mithermages books (Lost Gate, Gate Thief), contemporary magical fantasy for readers both young and old.

Card lives in Greensboro, North Carolina, with his wife, Kristine Allen Card. He and Kristine are the parents of five children and several grandchildren.

Emily Janice Card has read a number of audiobooks, including Ben Bova's The Aftermath, Orson Scott Card's Ender in Exile, Lisa Gardner's The Neighbor, and several titles by Kimberly Willis Holt. Card  is an actor, singer, and writer from North Carolina.  On screen, she's appeared in The Delivery.  Her stage work includes The Importance of Being Earnest, Bye Bye Birdie, The Fantasticks, and Once Upon a Mattress.  She also adapted and starred in the play A Sepulcher of Songs, based on a short story by her father, Orson Scott Card.

HONOEL A. IBARDOLAZA is an award-winning illustrator of children’s books and manga, including The Greediest of Rajahs and the Whitest of Clouds. He lives in the Philippines.

“A high-octane outer space adventure… The main characters in this volume are largely female, strong and intelligent, a wonderful departure from male-dominated extraterrestrial offerings. Ibardolaza's muscular art blends manga and Western aesthetics. An intriguing beginning; readers will clamor for the follow-up.” —Kirkus Reviews

“It's a fun read, aided by the dynamic artwork of illustrator Honoel A. Ibardolaza. And the cliff-hanger ending will leave readers waiting anxiously for the next installment.” —Deseret News