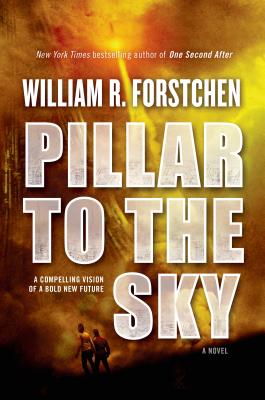 By William R. Forstchen
Email or call for price
Out of Print

From William Forstchen, the New York Times bestselling author of One Second After, comes Pillar to the Sky, a towering epic to rank with Douglas Preston's Blasphemy and Michael Crichton's Prey...

Gary Morgan—a brilliant, renegade scientist is pilloried by the scientific community for his belief in a space elevator: a pillar to the sky, which he believes will make space flight fast, simple and affordable.

Eva Morgan—a brilliant and beautiful scientist of Ukranian descent, she has had a lifelong obsession to build a pillar to the sky, a vertiginous tower which would mine the power of the sun and supply humanity with cheap, limitless energy forever.

Erich Rothenberg—the ancient but revered rocket-scientist who labored with von Braun to create the first rockets and continued on to build those of today. A legend, he has mentored Gary and Eva for two decades, nurturing and encouraging their transcendent vision.

Franklin Smith—the eccentric Silicon Valley billionaire who will champion their cause, wage war with Congress and government bureaucracy and most important, finance their herculean undertaking.

The Goddard Space Flight Center—the novel's pre-eminent hero, it's enormous army of scientists, engineers and astronauts will design, machine, and build the space elevator. They will fight endless battles and overcome countless obstacles every step of the way.

This journey to the stars will not be easy—a tumultuous struggle filled with violence and heroism, love and death, spellbinding beauty and heartbreaking betrayal. The stakes could not be higher. Humanity's salvation will hang in the balance.

William R. Forstchen is the author of the New York Times bestseller One Second After and We Look Like Men of War, among numerous other books in diverse subjects ranging from history to science fiction. He has co-authored several books with Newt Gingrich, including Gettysburg: A Novel of the Civil War, Pearl Harbor, Days of Infamy, To Try Men’s Souls and Valley Forge. Forstchen holds a Ph.D. in History from Purdue University, with specializations in military history and the history of technology. He is currently a Faculty Fellow and Professor of History at Montreat College, near Asheville North Carolina. He is a pilot and flies an original WWII recon "warbird." He resides near Asheville with his daughter Meghan.

“A riveting cautionary tale.” —Booklist on One Second After

“An entertaining apocalyptic thriller.” —Publishers Weekly on One Second After

“Good storytelling consists very simply of creating characters so believable that the reader forms a deep bond. Forstchen did such a damned fine job with One Second After that shortly after the first page, I had been reeled in hook, line, and sinker.” —David Hagberg, New York Times bestselling author of The Expediter on One Second After