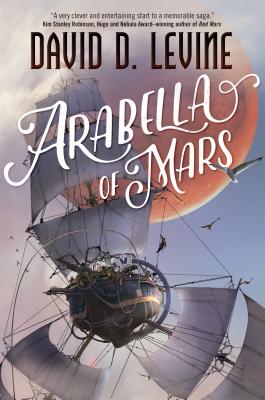 This is book number 1 in the The Adventures of Arabella Ashby series.

Since Newton witnessed a bubble rising from his bathtub, mankind has sought the stars. When William III of England commissioned Capt. William Kidd to command the first expedition to Mars in the late 1600s, he proved that space travel was both possible and profitable.

Now, one century later, a plantation in a flourishing British colony on Mars is home to Arabella Ashby, a young woman who is perfectly content growing up in the untamed frontier. But days spent working on complex automata with her father or stalking her brother Michael with her Martian nanny is not the proper behavior of an English lady. That is something her mother plans to remedy with a move to an exotic world Arabella has never seen: London, England.

However, when events transpire that threaten her home on Mars, Arabella decides that sometimes doing the right thing is far more important than behaving as expected. She disguises herself as a boy and joins the crew of the Diana, a ship serving the Mars Trading Company, where she meets a mysterious captain who is intrigued by her knack with clockwork creations. Now Arabella just has to weather the naval war currently raging between Britain and France, learn how to sail, and deal with a mutinous crew…if she hopes to save her family remaining on Mars.

David D. Levine is the author of novel Arabella of Mars and over fifty science fiction and fantasy stories. His story "Tk'Tk'Tk"won the Hugo Award, and he has been shortlisted for awards including the Hugo, Nebula, Campbell, and Sturgeon. His stories have appeared in Asimov's, Analog, F&SF, numerous Year's Best anthologies, and his award-winning collection Space Magic.

He lives in a hundred-year-old bungalow in Portland, Oregon.

“Hugo award winning author David D. Levine's first full length novel, Arabella of Mars, is the delicious love child of Jane Austen, Patrick O'Brian, and Jules Verne! Sent back to England from her family's estate on Mars, Arabella despises the life of a staid young Regency lady. Then a shocking threat to her family on Mars forces her to undertake a desperate, impossible journey back to the colony--a journey that will change her forever. Arabella Ashby is a great character, and wonderful worldbuilding, tight plotting, and a breakneck pace make Arabella of Mars a real page turner! I look forward to the next book in the series.” —New York Times bestselling author Mary Jo Putney, author of Not Always a Saint and Once a Soldier

“This rollicking interplanetary adventure captured my heart. Who could resist a world in which coal-powered ships sail to Mars, borne aloft by balloons of Venusian silk, doing battle en route with French privateers? To protect family and fortune, Arabella Ashby masquerades as a boy and takes a berth as a cabin boy on a fascinating voyage. There’s a mysterious captain, an intriguing automaton, pirates, Martians, a bit of romance, and so much more. I’m grateful Levine has promised a sequel. Arabella Ashby proves herself to be a clever and capable heroine, and I’m looking forward to her next adventure.” —Nebula, World Fantasy, and Philip K. Dick Award-winning author Pat Murphy

“David Levine has reached back past the Martian romances of Percival Lowell to an even earlier moment, creating a precursor to steampunk that I suppose we should call sailpunk. It’s a delightful addition to the Matter of Mars, bridging the long gap between Kepler and Burroughs with a Regency entry, filled with all the drama of the Napoleonic wars, now here complicated by a drastic Martian intervention, and animated most of all by Arabella, a young woman filled with curiosity and courage. It’s a very clever and entertaining start to a memorable saga.” —Kim Stanley Robinson, author of the Nebula-winning and Hugo-winning Mars trilogy

“Regency space opera in its best form! An intrepid, intelligent heroine, wonderful characters, and a breathtaking conflict. Who could ask for more?” —Patricia Rice, author of Saturn's Daughter series

“If Edgar Rice Burroughs, Jules Verne, and Patrick O’Brien had sat down together to compose a tale to amuse Jane Austen, the result might be Arabella of Mars. So. Much. Fun!” —Madeleine Robins, author of The Stone War, a NYT Notable Book, and the Sarah Tolerance Regency mystery series

“David Levine’s entertaining debut is a delightfully detailed airship adventure, complete with romance, pirates, Martians, automata, and a charming Jules Vernian imagining of the alternate-world science involved in sailing a ship straight through our solar system.” —Tina Connolly, author of the Ironskin Trilogy and Seriously Wicked

“Interplanetary pirates! Imperiled inheritances! Disguises! Rebellion! Romance! Arabella of Mars is a blast—a smart, resourceful heroine, a non-stop adventure packed with thrills, charm and surprises, and a fascinating world I hope to see a lot more of. A thoroughly engaging debut.” —Kurt Busiek