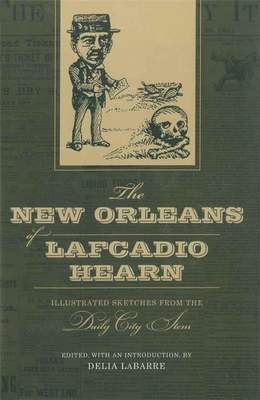 By Delia Labarre (Editor)
$24.95
Special Order. May not be available. Call the store for details.

Lafcadio Hearn (1850-1904) was a master satirist who displayed a fiery wit both as a writer and as an artist. For seven months in 1880, he surprised and amused the readers of New Orleans with his wood-block "cartoons" and accompanying articles, which were variously funny, scathing, surreal, political, whimsical, and moral. This delightful book collects in their entirety, for the first time, all of the extant satirical columns and woodcut illustrations published in the Daily City Item--181 columns in all. Hearn displays immense range, illuminating in words and prints the unique culture of New Orleans, including its Creole history, debauched underworld, corrupt politicians, and voudou practitioners. The columns are expertly annotated by Delia LaBarre, who places them in their unique Crescent City context.

With virtually no training in art of any kind, Hearn began creating his illustrations partly to boost the circulation of a small daily newspaper in a competitive market. He believed in the power of satirical cartoons to communicate big ideas in small spaces--in particular, to reveal the habits, prejudices, and delusions of the current generation. Blind in his left eye (since a boyhood accident) and severely myopic in his right, Hearn nonetheless painstakingly carved out drawings on wood blocks with a penknife to be printed alongside his articles on the newspaper's letterpress. Hearn developed, from the first of these woodcuts to the last, a unique style that expressed the full range of his wit, from razor-sharp condemnation to tender affection. Hearn had a keen eye for the absurd, along with an extraordinary ability to modulate his criticism and praise in a continuum from cauterizing vitriol to palliative balm, from the heaviest sarcasm to the lightest wit. In the pieces collected here, there can be found a unifying thread: Hearn's love/hate relationship with the virtues and vices of New Orleans, a city that continually amused and amazed him. Born in Greece and raised in Ireland, Lafcadio Hearn immigrated to the United States as a teenager and became a newspaper reporter in Cincinnati, Ohio. When he married a black woman, an act that was illegal at the time, the newspaper fired him and Hearn relocated to New Orleans. In the early 1880s his contributions to national publications (like Harper's Weekly and Scribners Magazine) helped mold the popular image of New Orleans as a colorful place of decadence and hedonism. In 1888, Hearn left New Orleans for Japan, where he took the name Koizumi Yakumo and worked as a teacher, journalist, and writer. "And it may come to pass that I shall have stranger things to tell you; for this is a land of magical moons and of witches and of warlocks; and were I to tell you all that I have seen and heard in these years in this enchanted City of Dreams you would verily deem me mad rather than morbid."--Lafcadio Hearn, 1880, describing New Orleans in a letter to a friend

Delia Labarre is editor of the 2003 edition of Hearn's novel Chita: A Memory of Last Island and is founder of the Lafcadio Hearn/Koizumi International Center in New Orleans.