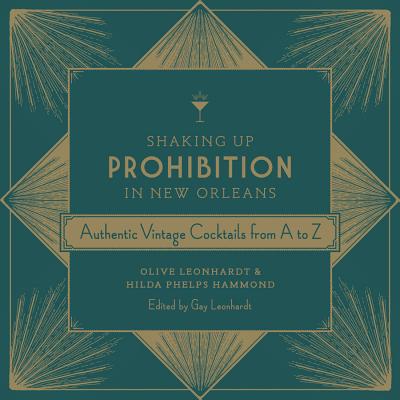 In the 1920s Prohibition was the law, but ignoring it was the norm, especially in New Orleans. While popular writers such as F. Scott Fitzgerald invented partygoers who danced from one cocktail to the next, real denizens of the French Quarter imbibed their way across the city. Bringing to life the fiction of flappers with tastes beyond bathtub gin, Shaking Up Prohibition in New Orleans: Authentic Vintage Cocktails from A to Z serves up recipes from the era of the speakeasy.

Originally assembled by Olive Leonhardt and Hilda Phelps Hammond around 1929, this delightful compendium applauds the city's irrepressible love for cocktails in the format of a classic alphabet book. Leonhardt, a noted artist, illustrated each letter of the alphabet, while Hammond provided cocktail recipes alongside tongue-in-cheek poems that jab at the dubious scenario of a dry New Orleans. A cultural snapshot of the Crescent City's resistance to Prohibition, this satirical, richly illustrated book brings to life the spirit and spirits of a jazz city in the Jazz Age. With an introduction on Prohibition-era New Orleans by historian John Magill and biographical profiles of Leonhardt and Hammond by editor Gay Leonhardt, readers can fully appreciate the setting and the personalities behind this vintage cocktail guide with a Big Easy bent. A perfect gift for lovers (and makers) of craft cocktails, arbiters of style, and celebrants of the Crescent City, Shaking Up Prohibition in New Orleans captures the essence of the Roaring Twenties.

Known for illustrating the covers of the literary magazine The Double Dealer and for her book New Orleans, Drawn and Quartered, OLIVE LEONHARDT (1895-1963) was an illustrator and artist who attended Newcomb College, the New York School of Fine and Applied Arts, and the Art Students League. HILDA PHELPS HAMMOND (1890-1951) met Olive Leonhardt through mutual friends at Newcomb, and they socialized in art salons, at Junior League events, and at marches for the suffrage movement in New Orleans. A graduate of Tulane University, Hammond organized the Women's Committee of Louisiana and is remembered as an outspoken critic of Governor Huey P. Long.